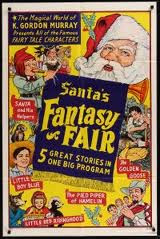 K Gordon Murray, the man responsible for many of the films we ran back around Halloween cut and pasted clips from many of those films into this holiday family spectacular....

Santa gets ready to head off from his cloud city at the north pole. He winds up his clockwork reindeer and then heads off. On earth we see 3 kids plotting to jump Santa to get the toys, a poor mother trying to comfort her daughter and a devil on a roof top. After playing a game of moving chimneys with the devil the Santa portion of the film stops and we get clips from various children's films:

An abbreviated version of Puss in Boots.
A section from the end of Little Red Riding Hood
Part of a version of Rumpelstiltskin
Some of the Pied Piper of Hamlen starring Van Heflin
The story of the Golden Goose.

The film then finishes up with Santa as he resolves the various threads.

This is one of three or four films that K Gordon Murray put together using new holiday shorts to bridge clips from his other feature films. If I remember correctly they were advertised in such away that you seemed like you were getting a couple of features instead of clips. I can imagine parents being outraged at thinking they were getting more than 90 minutes of entertainment for their kids.

To be honest I can't really recommend this film in any conventional sense, however if you saw any of the films we reviewed back around Halloween then you might be interested in seeing how those films were recycled over and over again. This is also the sort of film that anyone who is interested in what used to shown in the waning days of Kiddie Matinees will want to check out.

I'm not sure what the status is of this film or the the Murray films in general, since I know his estate have been trying to regain control of the films from the collectors market, however I kind of suspect that they think the films have a bigger audience then the small one of twisted individuals like myself who remember the films with a fondness. If you're interested I suggest looking on line and at collectors shows.
Posted by Steve Kopian at December 25, 2011

Email ThisBlogThis!Share to TwitterShare to FacebookShare to Pinterest
Labels: wtf