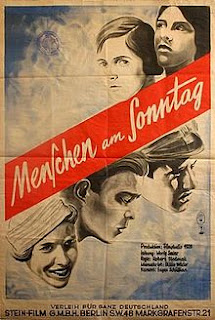 What happens when you bring Kurt and Robert Sidomak, Edgar G Ulmer, Fred Zinnemann and Billy Wilder together? People on Sunday.

Using non-professional actors, really just people on the street playing themselves, this is the story of what happens when a traveling wine saleman picks up a movie extra on a Saturday afternoon and they make date for the next day. They then each bring along a friend...

As the promotional material for the film states (as quoted in the documentary Weekend am Wannsee that is included on the Criterion DVD) nothing happens. Actually what happens is the couples shift and twist as they hang out on the banks of the river, swim and walk through the park. Inter-cut with this are sequences showing live in the city and in the park.

A charming, if slightly cynical film (the two men are ultimately on the make) it's simply a sweet little film about life on one Sunday in Germany. There are no grand revelations, no heavy dramtics, just people being people.

I was moved to smile.

I really liked this film a great deal. Its a small little trifle that is nicely the flip side of so many films that insist on showing us the gloom and doom that is much of life. Yea there is a bit of cynicism but at the same time there is a sense that there is a lightness to life.

The Criterion Edition has two different music scores. One is a jazzy score by the Monto Alto Orchestra and the other is by Elena Kats-Cherrin performed by the Czech Film Orchestra. I prefer the second one for the most part.
Posted by Steve Kopian at December 09, 2011