Silence of the Lambs- The Original Cut 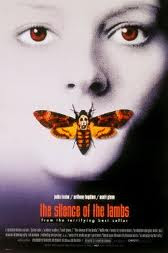 Jonathan Demme is quoted somewhere in one of the Criterion Collection editions of Silence of the Lambs as regretting not keeping a copy of the directors cut of the film. I on the other hand regret loaning the video tape to a friend who never returned it...

I had purchased my copy of the rough cut at a nostalgia convention years and years ago. It was actually from the same guy who sold me a copy of John Woo’s The Killer saying that this was unlike any Chinese action film I had ever seen. He was right and I was a Woo fan from that point on. I was also told that this version was better than the one that I had seen in the theater. He was right on that point as well.

The work print is some 30 minutes longer than the Oscar winning version and it’s even better…however it’s not a crowd pleasing film. The rough cut film is incredibly darker than the release version to the point that I don’t think it would have won any Oscars simply because no one would have wanted to go there. Anthony Hopkins’ Hannibal Lecter is truly the personification of pure evil in this cut. Sure he’s charming, but you can feel the menace and the nastiness behind each look, word and action. He is not the rogue cannibal but an engine of evil working very hard to manipulate things his way. I know several people I showed the film to said that they didn’t like it because they couldn’t feel anything for Lechter but dread.

The rough cut actually plays closer to the book. Clarisse is in way over her head and it’s clear that she is being manipulated by both Lecter and Scott Glenn’s character who need her connection to the confined doctor in order to stop Buffalo Bill (He’s under pressure because of who Bill has kidnapped). Glenn’s view of Clarisse is as an expendable pawn. What you see in this cut that you don’t see in the theatrical cut is that Clarrise may not graduate from the academy because she is being pulled into the investigation and her instructors are not giving her or her roommate (who has a slightly larger role) any leeway.

After purchasing the tape years ago I never saw any reference again until I saw some comments from Demme on the Criterion edition of the film (I believe on the Laser Disc edition) saying that he regretted not keeping a copy of that version. He said that the only bits that he knew to exist were in the clips included as deleted scenes by Criterion. I’m sure that the work print exists somewhere, I just haven’t run a cross another copy.

If you should ever find yourself with a chance to see this version (which when I saw it was in a fair time coded print) do so. It’s a wonderful example of how one crafts a winning crowd pleasing classic---by diminishing an even scarier film that you won’t want to see again because it makes your skin crawl, even on repeated viewings.
Posted by Steve Kopian at December 20, 2011