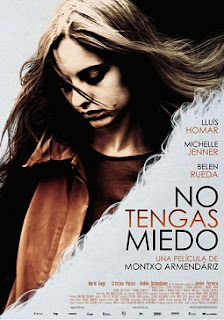 If the subject of child abuse upsets you stop reading now. This is a painful (but not particularly good) look at incest and it's effects on a young woman. If you don't want to know more stop here and move on.

Now that you've been warned...

As a child Silvia's father begins to molest her. When her mother discovers her daughter playing a similar game with her dolls she asks who taught her that. When she tells her Daddy, her mother calls her a liar and the abuse continues. The abuse continues for years until Silvia finally confronts her father.

That's it. that's the film, other than the film is periodically stopped by people in an incest survivors group telling the story of their abuse. Its a cycle of abuse, avoidance, more abuse, more avoidance, ect, until she finally gets the strength to stop it.

Well acted and well made the film kind of wears down the audience because the film is, for most of it's running time, simply the cycle of events. While I know that's the way it must feel for Silvia, it doesn't make for s particularly good movie.

Forgive me I won't give a film on an important subject a free pass just because it's dealing with something important. A film must work dramatically if it's a drama or teach if it's a documentary. After a certain point Don't Be Afraid stops working.

Blame the script which has Silvia a silent cypher for most of the film. Yes, I know this is how some people cope, but at the same time there is nothing there but haunted looks which gets rather tiring after a while. Equally damaging is how Silvia's father is pure evil from the get go. I'm not defending him, only saying that he's so one note that it's a stacked deck. We hate him from the second he says the title to his daughter the first time, we don't need to have him reduced to cardboard.

Understand I'm reviewing the film as a film and not a polemic. As a polemic it's game set and match to the film, but as a movie, as dramatic representation of something, it's not particularly good...because the film acts like a polemic.

Ultimately its kind of hard to review a film on this subject since more often than not we see films for enjoyment and a subject like incest is not something we can enjoy. If you want to know what I mean by what a better film on a dark subject such as this could be you may want to track down Children of Darkness a film on child sex trafficking that will curl your toes and other things. I reviewed it back in January and I'm still haunted by it. On the other hand I don't think I'll much remember Don't be Afraid before the end of the year.

As to whether you should see this film, you're on your own.
Posted by Steve Kopian at December 08, 2011