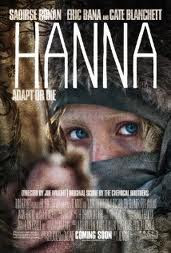 Living deep in a snow covered wasteland of Finland Eric Bana is raising his daughter to be a ruthless killing machine. Cut off the world he teaches her as best he can so she can survive in the world. There is a method to his madness, he is trying to protect her from Cate Blanchett who will do anything, anything, to get her hands on young Hanna. One day when Hanna professes to be ready, Bana brings out a tracking device. If she turns it on it will bring her into contact with the Blanchett; if she doesn't flip the switch they will continue on as before. She of course flips the switch and all hell breaks loose.

Saorise Ronan plays Hanna with an icy coolness. She is very good at what she does, but she is also a fish out of water. Once things are set in motion and Hanna is turned lose in the world she makes it very easy to believe that she can speak a variety of languages and kill you in 47 ways to Sunday but at the same time is baffled by how a light switch works. Its a tricky role that she manages to pull off wonderfully.

Cate Blanchett is hopefully a shoe in for at the very least an Oscar nomination. Playing one of the greatest villains you'll ever see on screen, Blanchett is the reason this film will have a long and healthy life in the years to come. Evil isn't strong enough word for what Blanchett is, she is somewhere else. Stuck in some sort of twisted neurotic world of her own she is the sort of vile creature that might give Hannibal Lechter a run for his money (though she is closer to Lechter of the books and the rough cut of Silence of the Lambs). Nothing is beyond her or her aim. I do warn you you will not like her in any way, she is pure demon and there is nothing to love about her.

The film itself is an odd mix of action and coming of age tale. As Hanna heads to the meeting with her father and her target she is forced to come to terms with growing up and dealing with a world that she only knows as abstractions. The things her father taught her can only take her so far. Its an intriguing tale that is not really like any other I've run across in film.

Its uniqueness helps the film over come some bumps in the road. These bumps come mainly in the cool distanced style of director Joe Wright. Wright seems to be very much going for a feel and a look for much of the film and this form over content weakens the film in places where a little bit more emotion could have been used. This is particularly the case toward the end of the film where things seem to be a tad neater than they should have been.

Still I like the film a great deal and find that I was thinking about the film for days after I saw it on home video.

A big thank you to long time friend of Unseen Film Miriam for pushing me towards the film. For those of you who haven't discovered her blog in the side bar I suggest you all go over and click on mimo studios or simply click here.
Posted by Steve Kopian at December 30, 2011