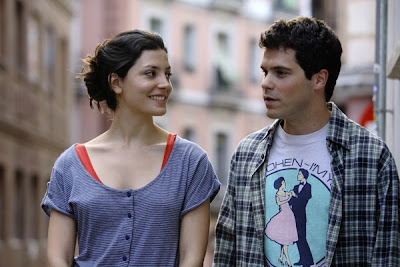 "Do you have a book with a blue cover by a foreign author? It's a a love story. I heard about it on the radio."- book store customer desperately looking for a book

I don't care what the one woman said at the screening I attended I loved this film. It's a film that achieved what few films do, applause from critics at a press screening.

This film is thee course of a couple who break up and still orbit each other over the course of many months. It's told in a story broken into several parts, that reflect stages in the break up. It uses music, voice over, subjective camera and a variety of other tricks to tell a story that will touch you and make you feel...

I could have written this film had I been a better writer. I know I've lived it.

I can't completely explain this film other than to say it's all about breaking up with someone and finding that you still love them but that life is pulling you in other directions but still you can't let go. Its a got a bunch of characters that you feel you know, a fantastic sense of reality and how time changes our relationships (our hero reconnects with his boyhood best friend and quickly realizes they have nothing in common).

The film also manges to get the moments dead nuts right. Credit it to the use of subjective camera for example Ramiro goes on a date with an old friend until the ex is mentioned and then suddenly she appears and begins to silently travel around with the couple. Also credit the fantastic use of music which doesn't so much underscore what is happening, rather it connections you perfectly to the emotional state of one of the characters. I was thinking that the music in the final scene was odd until I realized that it perfectly matched the emotional state of Ramiro (I know that's how I felt when I did something similar).

If you love wonderful REAL romances see this film. Its not really a happily ever after film (the end is uncertain) but its one that hits every emotional point dead on perfectly.

I loved this film. It's an amazing and emotional piece of filmmaking.

See this film if you can.

(It also has brilliant quotable dialog that I wanted to include except that my scrawl from the darkness is unreadable.)
Posted by Steve Kopian at December 06, 2011