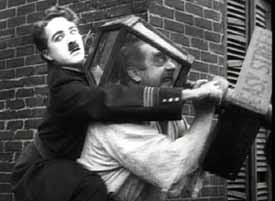 This is a 50 minute film about one of the lost sons of Scotland. Campbell was born in the lat 19th century and through circumstance drifted into acting. His huge physical stature made him some one you remembered once you saw him. Oddly he had a sweet and handsome face that was hidden by garish make up in his film roles. Campbell eventually found his way into the Karno troop that would bring Chaplin and Stan Laurel to the US. Everyone went every which way and it wasn’t until several years later that Chaplin reconnected with Campbell when he was starring in a broadway show. Chaplin scooped up his friend and the rest is cinematic history.

The life and times of Campbell are not a completely happy one. As his fortunes rose with Chaplin tragedy struck close to home with the death of his wife and a marriage to a gold digger and death in relatively rapid succession. It’s a story that I never knew until I saw this wonderful little film.

Seeing the film I was torn, here is such an iconic person, who only made a hand full of films and deserving of a really detailed telling of his life that will put him back into the public eye, however time and the brevity of his life make that kind of impossible short of a narrative film. I loved (and was heartbroken) by what I saw in this film, and I didn’t want it to end.

This is a super little film, that manages to do what it seeks to do, namely reveal the life and times of a great actor who was lost much too early.

(Though see if you can rent it since the film only runs 52 minutes and there are no extras on the DVD)
Posted by Steve Kopian at December 28, 2011