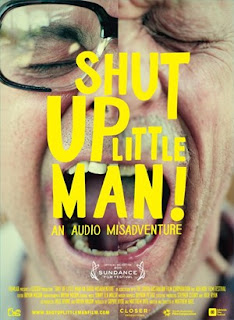 Wonderful documentary on the Shut up Little Man recordings and the entire audio verite genre.

The story begins when two friends from the Midwest, Eddie Lee and Mitchell D, move to San Francisco and end up taking an apartment next two two guys, Peter and Raymond, who would get drunk and verbally abuse each other at all hours of the day and night. When Eddie and Mitch were unable to get their neighbors to quiet down, they begin to record the fighting for evidence in case anything should happen.

As they recorded more and more of the fights they became fascinated by what they were hearing to the point that they would add clips into mix tapes or have friends over to listen to the live rows. Eventually through tape trading and rabid fans (such as Dan Clowes and Devo) the tapes took on lives of their own becoming the basis of plays, movies, comics and other art forms.

Using the return of Eddie and Mitch to the Bay Area as launching point the film looks at how the tapes were made, who their subjects were and how the the recordings just keep going on and on and on in popular consciousness.

A strange combination of funny, cringe inducing frankness and informative tract this is one hell of a documentary.

I put the film on because it sounded like a goof and a lark. Before going in I knew nothing of the subject or the film other that it played at New Directors New Films earlier in the year (I missed the screening because of a trip to the emergency room).
I was completely unaware of the whole cult of Peter and Raymond. It's not completely surprising since my strong interest in tracking down similar material was fading just as the tapes were starting to get popular.

As the film started I was bowled over by the insanity of it all. Peter and Raymond were clearly off their nut, and their rants were strangely addictive. The two guys Mitch and Eddie were instantly likable and you can't help but feel their terror at moving in next to the two crazies.

For me one of the film's joys is that it never runs out of steam. Watching the film I was pretty certain that the film's subject matter was going to run out, but the film twists and turns taking the recordings and adding not only what happens next (interviews, plays, comics and various attempts at filming them) but also the ideas of secret recordings made public. There is a hysterical sequence of Orson Welles bantering back and forth about how to do a frozen pea commercial, that shows how far reaching the verite subject reaches. The film also shows how similar things are happening to day with cellphones and the Internet putting everyone's rants as potential source material. (And of course there are mash ups with Christian Bale's rant intercut with one of Peter and Raymond's.

By the end I was left exhausted and slightly confused by a film that entertained and enlightened me, simply because it did more and unexpected things with it's subject matter.