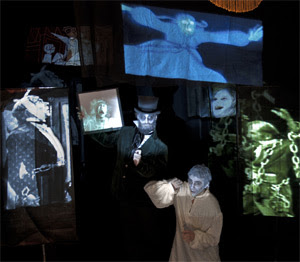 Theoretically I shouldn't be reviewing this, what I saw was the second performance ever and the press performance is tomorrow, but I think I saw enough to know that this is an intriguing work in progress.

The show is the classic story told by a group of actors who both speak Dickens words, but also mouth the words from 35 film versions plus. Clips are projected over the actors on scrims, on sheets, on the floor and on hand held "mirrors". Its the story we all know but with some meta moments where a few classic sequences are played over and over themselves. When it works it works extremely well with moments that both get to the heart of the story and also shine a new light on its themes. Unfortunately there are moments when the meta nature of the colliding versions falls flat, the speeches of Scrooge that he will keep Christmas Past Present and Future if he's allowed to change his ways derails the show at a moment when it really should make us feel something else.

This isn't to sell the show short and say it's bad, it's not. Its simply to say that the show is something that needs work, it needs refining. Its close to being a really good show, but its got kinks in it that need to be worked out. If Farrington had more than 18 days he might be able to turn it into a classic that would be worth seeing every year. Right now it's an interesting doodle.

Big question, is it worth seeing?

Actually yes (after all I'm taking the time to mention it).I think that if you know that you're getting, a weird mash up that mostly works, I say go for it. If you want perfection go elsewhere...or at least wait until toward the end of the run when things may actually work better.

For information and tickets click here.
Posted by Steve Kopian at December 03, 2011

Email ThisBlogThis!Share to TwitterShare to FacebookShare to Pinterest
Labels: christmas, not a movie