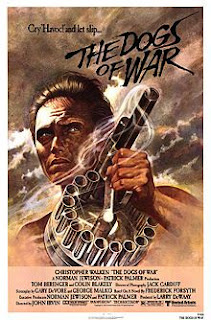 On of the first films to star Christopher Walken, if not the first film to have him as the lead after he won an Oscar for the Deer Hunter. The film is based on a Frederick Forsyth novel. It concerns a New York based mercenary who is hired by a bunch of rich men to put a team together to bring about a regime change in a small African country. As Walken’s Jamie Shannon puts his team together and plans the raid he has to try and figure out if he would be better off hanging it up and doing something else.

Easily one of my favorite films of the 1980’s, possibly of all time, it’s a film that has hung with me ever since I saw it in a movie theater back in 1980 with my Dad and brothers. There is something about Walken’s quiet performance that has stuck with me when other films at the time had come and gone. I think perhaps it’s the fact that it was one of the first times where I saw a hero who seemed not to care, until he revealed that he did. One need only see the terrible retribution he takes for the death of a friend by shards of glass or the finale of the film where he screams “You’re late!” to the men who paid for the revolution, to understand just how much he really cares…

Actually Walken’s performance is different depending on where you see the film. What I mean by this is that the original US release version of the film is 16 minutes shorter than the version shown in the UK. In the UK version there is an expansion of the Walken role with scenes that give him a more human edge, in particular between him and the young boy who always seems to he sitting on his couch when he’s home. This addition material greatly enhances an already excellent film and makes it much better. Why the film isn’t available in the US is a matter that confuses me since one would think that they would have at least included it as deleted scenes on the DVD.

The material has only been released in the US on the now long out of print laser disc. As for being able to get it from the UK, you apparently can’t get it since the UK DVD is the cut US release- a fact prompted a call from Amazon UK when they heard me cry out in anguish when I popped in my import DVD and found it was short 16 minutes. (Its missing nature could makes this film the sort of thing that would have allowed me to include this in last weeks films we were never suppose to see)

This is a perfect thinking man’s action film. I know that some action films don’t like the film because there isn’t enough action. There is some action at the start, a little bit in the middle and a full on assault at the end. Mostly there is talk and the planning, which I find absolutely gripping because as Walken’s reconnaissance trip proves things don’t always go right. To my mind the climatic battle comes at the perfect moment to release all of the tension built up.

As you can tell, I really like this film a great deal. I like the cast which includes some of my favorite character actors (Tom Berringer and Colin Blakely) I also like that this film has a great early performance by Walken who, while a tad stiff and very intense is free of all of the ticks and lazy habits that have made many of his more recent film roles more fun cartoons rather than real people. This is not a role that you can make fun of.

Actually what I like most about the film is it’s just a great rip roaring tale. If you like well made, well thought out and wonderfully acted action films- especially where nothing has been computers have been used to enhance the action- see this film.

Currently out on DVD
Posted by Steve Kopian at December 28, 2011