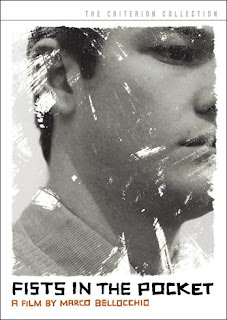 This is the one title that has been sitting on the suggested pile the longest. It hasn’t been that I haven’t tried to watch the film, I have, rather it’s simply that the copy I have is an old worn rental copy and two of DVD players refused the play the disc past the 40 minute mark. It wasn’t until I picked up a new DVD player that I was able to get through to the end.

Marco Bellocchio's first feature has been described as stick in the eye of Italian audiences with it’s attack at their sensibilities and notions of that most holy of all things, the family. To me the film has the feel of a filmmaker who is very assured trying to show off so he gets noticed (think of the situation with A Serbian Film from a couple of weeks back). This isn’t to say that the film is bad, it’s not, it’s very good and it will push your buttons. All I’m saying is that the film feels like it’s going an extra step or two just to make sure you notice the film. It’s the sort of film that you get from a young man full of piss and vinegar who is so sure he knows all of the world’s ills, which he is going to fix in one fell swoop by rubbing our noses in it. (In a weird way the result is now rather quaint)

The plot of the film has the son of a once prosperous family deciding that it would be best if his family all died. Mom is blind, his one brother is hopelessly middle class, another is an idiot and he has epilepsy. In his mind they all should die. His initial plan of driving everyone off a cliff gets derailed so he changes his approach to more one on one, beginning with walking his blind mother off a cliff.

Watching the film it’s easy to see how people were furious over it. It really is a poke in the eye of what many people consider sacred. It’s also easy to see how Bellocchio was put on the map by the film, since as well as being inflammatory it is a stunningly well made and well acted film.

I like the film a great deal. I like that the film, some 46 years after it was released, still can get under your skin. I found myself getting a tad angry at what I was seeing. I kept thinking people are not like that, and then I paused and realized, yes they are. People are as nuts as these people are.

Nothing like holding a mirror up to society, even almost 50 years later and seeing it reflected back.

Currently out in a very nice Criterion edition with a half hour documentary on the film and an afterward with Bernardo Bertolucci on the importance of the film.