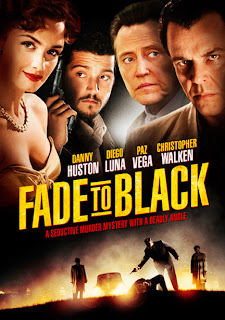 I pick up films from all over. There are the films I search out, the ones I’ve heard about or read about which I pick up automatically. There is channel surfing on cable. However the way I find most things is serendipity. Give me a catalog and I’ll notice things I never heard of. Give me a bargain bin and I’ll usually pull out a few odd ball titles. Friends give me films and I find some titles at the office lending library. I’ll pick up things anyway I can.

Recently I was going through a stack of oddball titles and I came across a DVD in a clear case that simply said “Fade to Black” on it. There really was no indication as to what the film was other than the title so, feeling kind of adventurous (I didn’t check IMDB for a synopsis) I just popped it into the DVD player and gave it a go.

Some times serendipity works (many times it doesn’t and you should be happy I don’t write up all the BAD films I run across).

Fade to Black is a neat little mystery with charm and wit and enough style to burn. It’s a breezy time killer that made me smile from ear to ear and email everyone I knew who I thought would like it as soon as it was done. It’s not the best mystery ever made, hell I’m not even sure its wholly a mystery, but as things go it s a charming Hollywood-esque romp.

The plot of the film has Orson Welles, trying to get over his divorce to Rita Hayworth and restart his career heading to Italy. He's going in order to make some fast money by starring in the film Black Magic. As he stumbles through the making of “a second rate film with a third rate director”, he ends up walking into the middle of a murder and political upheaval conspiracy in a country in upheaval. It’s a real life film noir.

It’s a fictional story of course, though as the final narration and the pre-end credits scribbles relate, more of this is true than you might think.

The joy of the film is Danny Huston as Orson Welles. Bigger than life and twice as ugly he barrels his way through the film in much the way that the real Welles seemed to barrel through life. Narrating the events we get his sly commentary on things which seem to twist things just enough that it makes it more fun than it has any right to be. Actually the performance reminded me more of Huston’s father, director John Huston, than Welles. Actually Huston plays things with a sly knowingness that comes from the playful place I’d seen both the elder Huston and Orson Welles would get into when they were being a jovial raconteur and joshing their audience (F is for Fake anyone?).

Is it high art?

Hell no, but it is a great deal of fun.

That the film works is thanks to director Oliver Parker who manages to keep things light and airy. Parker is rapidly becoming a man to watch here at Unseen Films since we’ve reviewed several of his films in the past (The recent St Trinian’s films and Dorian Grey) he’s also turned out some really good adaptations of things like the Importance of Being Earnest. It should go with out saying that the back catalog of his films are going on our list of films to keep an eye out for.

The film was released last October on US DVD and had been out in the rest of the world since it’s release in 2006.
Posted by Steve Kopian at December 03, 2011