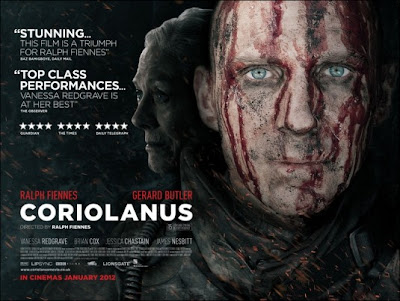 Ralph Fiennes's directs and stars in a modern day adaption of the Shakespeare play, and kicks major ass as a result.

We here at Unseen were suppose to see this film back in early October when the film screened at this year's New Yorker Festival, however illness,scheduling conflicts and familial medical emergencies prevented it. Earlier this week I took a day off to do Holiday shopping and took some time out to see the film in it's brief Oscar qualifying run before it gets a regular run next month.

The film is the story of Caius Martius, later Coriolanus, a roman general, who is running the empire. His methods have brought him into conflict with the Roman citizens and with several power brokers. As he is maneuvered into taking the position of Consul, things spiral out of control and he is banished. He then allies himself with his mortal enemy and marches on Rome.

The source says it's ancient Rome, however Fiennes says its the Balkans. This change of location and updating makes the film much more resonate with the world today. Watching the film I never thought about Rome. I thought about the politics of today. Sure it's always been argued that Shakespeare is timeless, but Fiennes has finally proved it.

The cast is incredible. Ralph Fiennes has taken on another role of a life time. There is a haunted quality to his performance, an unbridled intensity as the man who only feels at home in battle. There is a chilling exhortation to his wounded men to get up and continue the fight or he would turn on them, that says volumes about his state of mind. Brian Cox is wonderful as a senator who is Coriolanus' friend who is adrift among all the political moves. Vanessa Redgrave is equally stunning as the mother who is more butch than her warrior son. (I'm reserving judgement on Gerard Butler's performance since despite being second billed is given little to do)

Fiennes' work as a director is amazing. I can't believe that he hasn't done it before. Not only has he managed to make a stunning political film, but hes staged some really kick ass action sequences. I mean when was the last time that you thought about cranking up the sound of a fire fight in a Shakespeare film so that it rattles the windows? If you want another less violent reason to be impressed, realize that you will get sucked into this film and carried along even if you don't listen to all of the words. Trust me on this I didn't capture chunks of what was said, but I damn well knew what was going on. If you can move an audience completely and not have them catch all of the words you really have great talent.

Have I made it clear that I really liked this film?

I liked it so much that I knew about a half hour in that I needed to see it again. I was missing stuff... to that end I'm planning on seeing the film when the film opens wide in January and revisiting it in a review. There is just too much to this film that I need another pass through before I can fully write it up(hopefully with John and Bully in tow). Until I do, know that this film is really worth your time to see, especially if you don't like Shakespeare because this one transcends your expectations.
Posted by Steve Kopian at December 10, 2011