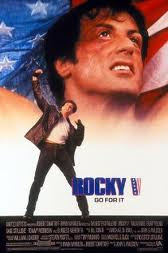 This is probably the wrong time to tell this story with the uploader of WOlverine going to jail for a year but then again it kind of makes the story timely.

One of the first bootleg video tapes that I ever ran across was in 1990 right before the release of Rocky 5. A co-worker of mine had some how managed to secure a copy of the soon released film. It was a horrible thing, several generations down, very dark and the sort of thing you had to squint to see. It was terrible and it probably cost a fortune as those things did at the time. It was however different thant what we normally think of as a bootleg since it was clearly not typical, it didn't look like it was shot off a movie screen, rather it appeared to be time coded, and it showed some signs of once having looked pretty good. It turned out that it was a work print of the film.

When I saw the bootleg of the directors cut/work print I was shocked at how good the film was. I couldn’t understand how people were beating up on the film in the reviews. There was a complexity to the Rocky character that had been missing from the previous three films. It was truly a throw back to the first film.

The plot has a now retired Rocky finding a potential protégé in a young boxer played by brief boxing prospect Tommy Morrison. As Rocky trains Morrison he is forced to deal with the health effects of his time in the ring, and the complications that his relationship is putting on his family, and particularly with his son. It’s a realistic look at a man who once had it all and who is almost wrecks his life to get back on top, even if it’s through the ability of a younger fighter.

The film in the rough cut was a revelation since it was a solid drama that showed Stallone to be a better actor and writer than his big budget popular films made him out to be. It ultimately had many themes and plot point Stallone would use in the later Rocky Balboa.

I looked forward to seeing the film in a theater when it was actually released.

When I got my chance several weeks into it’s theatrical run I was shocked. The film was not the great gritty film I had seen on the bootleg. The complexity of the film was gone. The health issues and hallucinations that Rocky was experiencing were down played or eliminated completely. Rocky was no longer a sad figure counting his days to his uncertain end, rather he was simply the loveable oaf that he had been previously. Worse it was all scored to a bouncy pop score of never were hits.

I was not happy.

I don’t think I ever really watched the film ever again even on cable where it was on eternal repeat for awhile. I couldn’t believe they had wrecked such a good film…then again they were aiming for a crowd pleasing film that would have people coming back again and again instead of a hopeful but somewhat troubling film about a boxer on the outs…

In doing research for this piece, I wrote this I was relying on a memory of film I last saw 20 years ago, I discovered that the film is actually now floating about on the internet thanks to director John Avilsen up loading the cut to you tube a few years back. I have not watched it, I’m not a fan of watching anything of length on my computer, however I’m planning on searching the film out and giving it another go. I suggest you do likewise, since I think you’ll be surprised and find that what is currently a mediocre film was once a small little treasure.
Posted by Steve Kopian at December 21, 2011