Television Under the Swastika (1999) 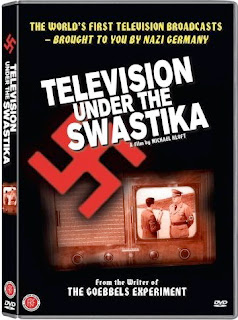 This is a very good documentary looking at how television briefly flourished under the Nazi's.

Okay, perhaps flourished is too strong a word, since the Nazi's only have around 500 TV's but they had the first regularly scheduled broadcasts (they started out broadcasting 3 days a week) and they covered many live events before American TV really was up and running. They started in 1935 and ended regular broadcasts in 1943 when the war made it impossible to keep a schedule. Broadcasts did however last for another year.

Service was started when the Nazi's feared that the American and English would dominate the infant field so they jumped into action. They set up a broadcasting service and the TVs went to high up party officials and were available to the public in TV Salons.

The images were at first poor and not many people watched, except to show off.The party officials were horrified at how they looked so they distanced themselves from the medium. However as technology improved and the Olympics arrived people started to come around. Unfortunately the plan to get ten thousand sets into peoples homes was derailed by the war since all of the technology was needed elsewhere.

The film is made up of footage found in the Federal Archives in Germany. The material is film that was either shot and cut together before broadcast (Film transmitted better than live people) or was the result of the method of film being shot, instantly developed and then broadcast which was used for some events such as the Olympics. As technology advanced they could do straight to air broadcasting, however there was no means to record that and none of it is believed to have survived.

This brief (52 minutes) documentary is a real trip for anyone who is interested in what life was like in Germany and how some of the big rallies looked with out the fancy presentations of the news reels or documentaries. The life as lived look is the result of TV covering events in long takes from limited angles so that we really see how things happened in a less than polished fashion. We also see the "fluffy" programing such as music programs, man on the street shows and documentaries that they programmed.

If the film has any flaw it's that it's limited in what we see. We see only what the Nazi's recorded on film and survived but nothing that was life to air. The result is the film kind of runs out of steam as it goes on. On the other hand it's full of things we might never have seen other wise.

This is a must see for anyone interested in the history of TV or of the Second World War.

Currently out on DVD from First Run Features.
Posted by Steve Kopian at December 12, 2011