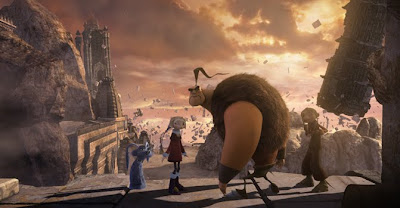 This is a CGI animated film based upon a French 2D animated series. The series ran briefly on Cartoon Network, but its run was so brief that its inclusion as one of the potential Oscar nominees for best animated film for 2008 left most people I know going "Huh?"

This is the story of Lian-Chu, the kind heart muscle, and Gwizdo, the brains of the operation, who along with Hector their fire farting dragon,he's more like a dog. They travel the world offering up their services as dragon hunters but never get paid.

Into their lives comes Zoe, the fairy tale loving niece of a king who is going blind. It seems the world is being devoured by a huge monster and all of the knights the king has sent out have never returned or if the do return they come back as ashes. In desperation the king hires the dragon hunters to stop the world eater. Zoe of course tags along...

What can I say other then why is this film hiding under a rock? This is a really good little film that is completely off the radar except as unlikely Oscar contender. Its a beautifully designed, fantastic looking film (The world it takes place has floating lands and crazy creatures) that constantly had me going "Wow" at it.

The English voice cast with Forrest Whitaker as Lian-Chu (one of the best vocal performances I've ever heard) and Rob Paulson as Gwizdo (think Steve Bucsemi) is first rate. Equally great is the script which doesn't talk down to its audience, using some real expressions not normally heard in animated films (not Disney nor Pixar). Its all really well done.

Is it perfect? No, some of the bits go on too long, but at the same time its is damn entertaining.

If you get the chance see this. Its one was of the better animated films from 2008.

Out on DVD and on cable rotation
Posted by Steve Kopian at December 11, 2011