Neutron The Atomic Super Man and the Black Mask (1962) 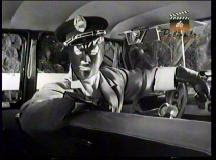 This weekend we're going to take a look at the first two of the Neutron films. These are films that look like masked wrestler films, however Neutron is not a masked wrestler, rather just a hero who wears a mask and fights like a wrestler.

Okay I'm going to be straight with you either you accept the the complete nonsense of these films or you don't, I mean high art they ain't. On the other hand if you can go with the truly mind bending strangeness of the films they are a blast, especially if you have friends who like to pick on movies.

This time out Neutron is almost a nonentity. Despite being talked about as a hero he's barely in the film, making only one appearance in the first 50 minutes of this 71 minute film.

The majority of the film has to do with the evil Dr Caronte(though it often sounds like karate) who wants to get his hands on the formula to make a neutron bomb. (no the bomb has no connection to the hero)...

...actually the main characters for much of the film has to do with a Dr Walker who kills the lead scientist creating the bomb. Walker wants to use the bomb to get power and wealth, while the creator wants only to use it to create world peace. Walker kills his colleague however the bomb goes off and walker is burned. By the time the police arrive Walker is gone and believed disintegrated like his victim.

Jimmy, the son of the dead professor and his two friends begin their own investigation. Walker meanwhile goes to see Caronte to get help (which includes the use of his zombie army).

And as for the ending---wow and wtf?

A clunky, but fun film, this is a film that survives thanks to great black and white photography and it's own loopy sense of reality. To be certain none of this could really happen or makes a great deal of sense, but at the same time the cast sells the story for all it's worth. You have great expressionistic sets that seem to have been crossed with a sale down at Dr Frankenstein's surplus. There are lumbering mutant zombies and a dwarf that acts as the villains lucky charm.

Its silly fun and the sort of thing that is perfect for a movie at 2am.

Definitely worth seeing for anyone who likes off Hollywood nonsense.

(available on the collectors market)
Posted by Steve Kopian at December 17, 2011