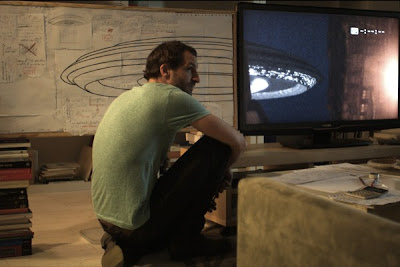 Friday is the start of Lincoln Center's Spanish Film Now. This is their annual survey of Spanish Cinema. I was lucky enough to catch three films in advance of the start and tonight, tomorrow and Thursday I'll be running reviews of three of the films. You'll want to take a look at the series since this year it's got a smokin' line up. Basicallly if you're in NYC between Friday and Christmas you should check out some of the films. Details are here.

From Nacho Vigalondo, director of Timecrimes comes Extraterrestrial, a film about an alien invasion.

The way the film was written up was: From the director of TIMECRIMES comes an alien invasion movie in which a man and a woman wake up to a Madrid taken over by spaceships. If you saw Timecrimes this might lead you to believe it was like that film, a dark scifi horror film about alien invasion instead of time travel.

Actually the film is essentially a romantic comedy of manners, and is one of the best surprises of the year.

The plot has Julio waking up in strange bedroom. He wanders out and finds Julia slightly in a daze making coffee. They don't remember each others names. It was a one night stand and now it's time to go...But he wants to use her phone cause his cell is dead. So is the land line, the cable and the Internet....

Cutting to the chase their are alien spaceships hanging all over the cities of Spain. Huge ships 4 miles across. What are they doing there? Nothing. They are just sitting there.

What transpires is a comedy of manners as the couple has to deal with her boyfriend, Carlos, who returns after some time away and with Angel a neighbor who loves Julia. How it's handled is badly, as lies and misspoken statements begin to pile up and soon the lies have unexpected consequences.

As for the aliens, they're just there, they just sort of sit there. The fact that they are just sitting there prompts several painfully telling statements about all our ideas about alien invasion stories effectively turning them on their head. (maybe they are here just for the hell of it)

I loved this movie a great deal. Its a film that turns conventions upside down and makes you rethink the idea of alien invasion and romantic comedy.

I know some people at earlier festivals HATED this film. They were expecting an alien invasion film and got something else. The misdirection was feeling that everyone in the screening I attended felt, but for the most part everyone seemed to really like it, especially that it took a road not yet traveled in getting to it's ending. While some, such as me, were disappointed that the film wasn't as inferred, I'm way more than happy at what I got instead.

"They come in spaceships bigger than a town and you think they're worried about being seen?"
Posted by Steve Kopian at December 05, 2011