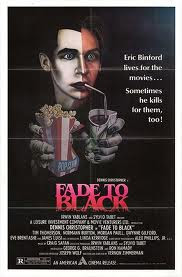 This love it or hate it thriller has kind of slipped from the radar over the years. Released at roughly the same time as the first Friday the 13th, this is an odd little film that was still rooted in the old horror traditions of telling a real story with real characters before the shapes and masked crazies took over the genre.

The story concerns an obsessive movie fan named Eric Binford, who goes over the edge and begins to play out some of his favorite movie murder scenes all the while romancing a girl who looks very much like Marilyn Monroe.

A mix of horror and dark comedy this is now an intriguing time capsule since it shows what a movie fan had to do to see some of his favorites before home video really was anything and before movie theaters stopped showing old as well as new movies. It’s a film that shows clearly what an old school cinefile used to be, namely a guy who went from movie house to movie house seeing movies when ever he could catch an actual screening on an actual movie screen. In those days you really had to be a tad crazy to keep up with all the film choices one had. While I am as crazed in some ways as Binford, I was lucky enough to mostly miss the need to travel to see films since cable was exploding and home video was beckoning…

That said I am old enough to be able to say I saw this film on it’s first run in cinemas. I went to see it with my Mom and my brothers in a small packed twin cinema that not long before had been a larger single screen theater…

As you can see this is a film that evokes a good number of memories for me.

The film itself is a good but not great little film. It’s a film that is very much a kind of late 70’s old school horror film where the lead character is more than a little unhinged. In a weird way the film’s lead character is a cousin to Robert DeNiro’s Travis Bickle in Taxi Driver, with the small man who acts out.

Of course this film is not on Taxi Driver’s level, it’s pure exploitation cheese, that would have disappeared for the ages had it not replayed the film references to ghoulish effect. (In a weird way it’s precursor to the Scary Movie and other referential horror films that would follow in the decades afterward.)

I like the film, and I like Dennis Christopher’s performance as Eric Binford. He manages to walk that fine line between being heartbreaking and scary until you realize how nuts he really is. Christopher was, and is, an under appreciated actor who always manages to turn in an interesting performance. On some level I think that this film kind of stalled his career since after this he has ended up largely relegated to TV shows. I can’t help but think that too many people saw him as crazy Eric Binford and wouldn’t let him do bigger budget features.

As I said this isn’t a great film, but as small scale horror films go it’s one that is going to hang with you… how d I know?

Well it’s been 30 years since I first saw the film and I can still replay chunks of the film in my head despite not having seen it in a good long while. It’s also a film who’s set up is such that it stays with you even when the four hundred variations of Friday the 13th have faded from view.
Posted by Steve Kopian at December 04, 2011