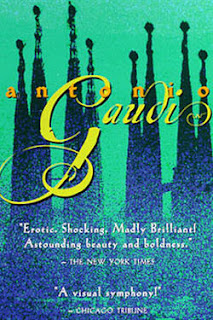 Hiroshi Teshigahara's film poem on the work of architect Antonio Gaudi. Its a 72 minute marriage of image and music of many of Gaudi's most famous works. There is very little dialog, mostly at the very end during the segment on the Sagrada Familia cathedral. The film is simply the works of Gaudi in context of the landscapes and cityscapes in which they exist.

I'm not going to lie or misdirect you, this is an often extremely beautiful film that is equally as frequently deadly dull. If you have no context about the works of Gaudi this film will probably bore the living snot out of you. For me I was about half way in when I noticed my interest had waned and I was starting to do other things around the room while I kept an eye on the film. I watched it all the way to the end and I floored by the awesome nature of the Sagrada Familia cathedral, but mostly I was ambivalent through most of it.

Since I was seeing it on the Criterion DVD, as soon as the feature was done I popped out the second disc which was full of extras and I watched that. I now had the context to appreciate the film.

I probably could have run this last week during the DVD extras week but at the same time I don't think so. The film, as odd as it is, improves greatly once you have context from watching the extras contained on the second DVD of the Criterion release. First up is a Robert Hughes documentary on Gaudi that puts things into a perspective that only Hghes can give. Secondly, and to me even better, is a 15 minute piece from the British TV show Monitor by Ken Russell on Gaudi. In 15 minutes Russell tells you just enough that you want to turn around and watch the feature film again. It s full of wonderful Ah Ha moments as you see things from the film in a new light. Thanks to the extras you get the sense of what Gaudi was doing, of how he worked and how he created and why he was doing it. You also get a sense of how he fits into everything. As Ken Russel points out after Gaudi died everyone went back to the same old way of doing things. Its maybe a twenty second sequence that explains perfectly what Gaudi is all about.

As a film unto itself, which is how I try to judge all film, Antonio Gaudi is a beautiful film that wears out it's welcome only to knock your socks off at the end. Assuming that you have a knowledge of Gaudi or watch the Criterion extras before you watch the film it's a beautiful record of what one man gave to the world.
Posted by Steve Kopian at December 06, 2011