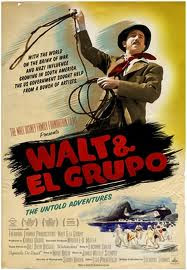 Walt and El Grupo is the story of Walt Disney’s trip to South America as both a good will tour for the US government which was afraid of Nazi influence in the region; and to find some new story ideas. The trip was also a desperate flight for Disney into a hopefully happier time since at the time he was taking the trip his studio was being rocked by a strike that was threatening to sink everything he had built up.

The trip, which was underwritten by the US government, who also promised to pay the cost of any films that resulted (Saludos Amigos and The Three Calbereros), in many way changed the studio forever. Walt took with him a number of close artists and animators (the El Grupo of the title) who would come to prominence after the trip (including Mary Blair who changed from an artist who cloned her husbands work into a unique visionary.)

Told through recollection of the people Disney and group contacted, the families of the travelers as well as historians and other “talking” heads, the film is full of the movies phots and especially the art work of those who went on the trip. Over the course of the telling we see how the art at Disney was altered (Mary Blair) and how what they saw ended up in Saludos Amigos and Three Calbereros, not to mention in other places for decades afterward.

This is a good little film that has tons of behind the scenes footage. If you are a big fan of Disney and especially classic Disney films this film is a real joy. If you click with the film this is going to be a wonderful rewatchable film (me me me) that is perfect for filling in the holes of knowledge of what was going on at Disney in the early 40’s. On the other hand if you’re not a huge Disney fan the films almost two hour running time is going to strike you as a DVD extra that has been hit with steroids.

I like the film and I highly recommend it for anyone who likes Disney films.