The Artist in brief PLUS Links, Updates and Other Nonsense 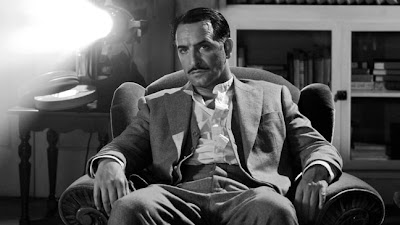 It's been a while since I've posted some links, and I'll do so shortly. First I want to just make a few notes before we get to the end of the year.

First up earlier this week I finally saw The Artist. This is the silent film from France that many people have picked as a shoe in for this year's Oscar for Best Picture. I was supposed to see the film at the New York Film Festival, however a familial emergency prevented it.

I'm not going to go into great detail on the film right now. I may at some later time do so, but for now know the film is good. I didn't connect to it the way many critics and many people in the audience have. My reservations come from my feeling it's more someone's idea of what a silent film should be rather than what a silent film is or was. Its a homage to a by gone era, done in a style that never existed. It also has the wonky story construction that is similar to some French comedies (which ultimately is what this is.)

Don't get me wrong, the film is most certainly worth seeing in a theater. I saw it at New York's Paris Theater and sat up in the balcony, imagining I was in an old movie palace. The joys of the film are best summed up in a numerous small moments, including one that had me tearing up, and another laughing at a joke that can only work in a silent film.

See the the film, just don't believe the hype.

And Now some notes and some links....

The second series of family films at Lincoln Center starts the day before Christmas and runs through February. There are some goodies here so do check them out:

A Trip to the Moon + Other Shorts
Georges Méliès, France, 1902, Digital; approx. 80m
A special chance to see the wondrous, playful movies featured in the recent film Hugo (based on the critically acclaimed book The Invention of Hugo Cabret). Former magician Georges Méliès was the wizard of early cinema with his magical creations of spacemen, fairies, magicians, and mermaids. Silent with recorded music.
All ages.
Dec 31 & Jan 1: 2pm

Bedknobs and Broomsticks
Robert Stevenson, U.S., 1971, Digital; 139m
Restored Roadshow Version!
Three English children are evacuated from war-torn London to live in a quite village—with a trainee witch (played by Angela Lansbury). To ensure the children keep her secret, she gives them a magic bedknob that allows them to travel anywhere they wish on a flying bed! Featuring the eye-popping scene on the Isle of Naboombu using a delightful mix of live and animated characters.
Rated G
Dec 31 & Jan 8: 11am

The Incredible Journey
Fletcher Markle, U.S./Canada, 1963, Digital; 80m
How else could you describe a 200-mile journey by three house pets if not as fantastic? Two dogs and a cat get lost on a family vacation and must make their perilous way home. Shot on location in the Canadian wilderness, the story is told by the plucky animals themselves. If you only know the title from the 1993 remake, this is the one to see!
Rated G
Jan 14 & 22: 11am

Jason and the Argonauts
Don Chaffey, U.K., 1963, Digital; 104m
In order to claim his throne, Jason must bring back the Golden Fleece from the distant land of Colchis. Even with the help of Hercules and the protection of the goddess Hera, their foes are daunting: a cyclops, harpies, an army of skeletons, and the seven-headed hydra. This is a great introduction to the special-effects genius of Ray Harryhausen and a truly mythic adventure.
Rated G but can be scary for those under 5
Jan 15 & 21: 11am

Time Bandits
Terry Gilliam, UK, 1981, Digital; 110m
A young boy meets a restless band of little people through a time hole in his closet. He joins them on their escape from their employer (the Supreme Being) after “borrowing” his map of the universe’s time holes to hunt for treasure. They run through different periods of history before encountering the Fortress of Ultimate Darkess where evil lives and must be defeated. Terry Gilliam’s lovingly crafted adventure is a funny, rambunctious delight (featuring, along the way, John Cleese, Sean Connery, and Michael Palin).
Rated PG
Feb 4 & 12: 11am

The 7th Voyage of Sinbad
Nathan Juran, U.S./Spain, 1958, Digital; 88m
In another great Ray Harryhausen adventure, Sinbad and his shipmates first encounter the island of Colossa and the mythic beasts that populate it while sailing home. They are tricked by a magician into stealing the cyclops’ magic lamp and only just manage to escape. Back in Baghdad Sinbad marries his princess but the evil machinations of the wizard force a return trip to the island...
Not rated.
Feb 5 & 11: 11am

Body Troopers aka Chasing the Kidneystone
Jakten på nyresteinen
Vibeke Idsöe, Norway, 1996, Digital; 91m
Eight-year-old Simon shrinks himself down to travel into his grandfather’s body to fight the kidney-stone that is making him sick. With the help of a white blood cell, he meets the Secretions Agent and Bile Duct among others on their way to try to stop the evil Calcium Crystals who are building a stone in Grandpa’s bladder. Note: English subtitles will be read aloud.
12 and under
Feb 19: 2pm
Feb 26: 11am

Manuelita
Manuel García Ferré, Argentina, 1999, Digital; 86m
Based on a famous Argentinian children’s song, Manuelita is a young turtle who gets lost from home in a runaway balloon. On her trip she makes new friends and discovers a talent for hat-making. A simple story with sweet songs, it’s perfect for the youngest viewers (and rarely seen on the big screen!).
Rated G
Feb 19 & 25: 11am

Mary Poppins
Robert Stevenson, U.S., 1964, Digital; 139m
Share the rollicking Disney musical with a new generation, as umbrella-toting super-nanny Julie Andrews reinvents child care with the help of a little magic and a lot of fun. When Mary Poppins appears, the Banks family of London finds an answer to the misbehaviour of young Jane and Michael. As fresh and lively as ever, the film’s tuneful, airborne delights are supported by a charming Dick Van Dyke as a chimneysweep, among others, as well as a beautiful flight into an animated Sunday paradise. Supercalifragilisticexpialidocious, indeed: this one’s a classic for a reason!
Rated G.
Dec 24 – 30: 10:30am & 2pm daily

Andrew Bird, subject of Andrew Bird:Fever Year which screened at the New York Film Festival is touring this spring if you want to see what all the shouting is about.

The first animated Tin Tin feature can be found here. Its from 1947. We're going to be running a review of the new one before it opens on the 21st.

The Rubin Museum in New York is running a film that is called Prince of the Himalayas. Its a version of Hamlet in Tibet. I'm planning on going as soon as Bully returns from his super secret mission to find a stolen egg salad sandwich recipe. Details can be found here.

Because we like to plan way ahead, The Museum of Art and Design in New York in screening a series on the Argentos, Dario and Asia in the spring. In formation on that series and their other cinematic offerings can be found here.

The story behind Arsenic and Old Lace is here.

Lost Snow White Lyrics.Something about being banned in Boston.


In other news the music sidebar that we were hoping to get up and running has been put on the back burner. Its not for lack of interest, its simply that there is way to much going on in our lives to make a go of it. Its still on the boards, but the promised before years end deadline is going to wooosh past.

One of the things that is distracting us, or me is trying to see if I can get this multi-media nightmare up for New Years Eve. It's something I've been delaying since the summer and it's either going to work or crash and burn. I'll know in a week or so if it's going to work.

I'm not ready to move into 2012 just yet but do keep in mind that tickets for the New York Jewish Film Festival, BAM Kids Fest, The New York International Children's Film Festival will be going on sale soon. Also Wim Wenders Pina opens on Christmas.

And while we at Unseen have been kind of quiet on some of the more recent releases reviews of some of the major non-festival films from the fall will be appearing here and there over the next few weeks. Trust me there is a ton of good stuff coming and I should know since I'm having to dance around a schedule that now stretches into the end of May.
Posted by Steve Kopian at December 11, 2011