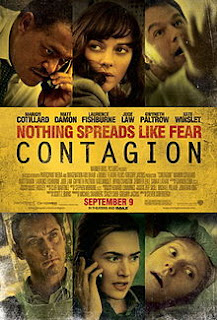 I was resisting seeing Steven Soderbergh's Contagion when it was in theaters because it looked like a big budget big screen film with tons of stars that was geared to be deep and meaningful and make a ton of money because it had a ton of stars.

The film completely went out my head until toward the end of the theatrical run when I was looking for something to see and I stumbled a cross the film and remembering that it was suppose to be good I sat down to watch it.

And you know what? Its a damn fine film.

The plot of the film follows the out break of a deadly disease and how it affects people in government and people on the street. We meet victims, survivors, doctors, news people, and a variety of other people. The film takes us from day twp (we see day one at the end) to a point several months into the out break. Its a tale of sadness and fear and hope.

The star casting is in its way a stunt and kind of necessary. First the stars bring us in to the film, but because the film has so many characters running across its slightly less than two hour run time there is a good chance that we would be lost with out them. The ability to say look Jude Law or Matt Damon or Laurence Fishburne means that the characters are instantly recognizable as they pop in and out of the story. People like Gweneth Paltrow or Kate Winslett show up for a few scenes and then are gone for whole chunks of the film the fact its them means we don't have to think, who was that again when we see them later on.

The film itself is a frightening tale very much in the vein of the Andromeda Strain but tinged with the sensibility of something like Soderbergh's earlier Traffic. This is a plague across a vast canvas. Its a tale that is terrifying because it's very possible. Don't see this film if movies affect you deeply because you may go home and never come out of your house again.

I think it's one of the best films that Steven Soderbegh has made, which is saying a great deal.

If there is any real flaw in the film it's simply that it's too short. There are simply too many characters and it would have been nice to spend a bit more time with them.

If you want to see one of the better films of the year (I'll wait to see it again before I decide if it's one of the best) see this film.
Posted by Steve Kopian at December 29, 2011