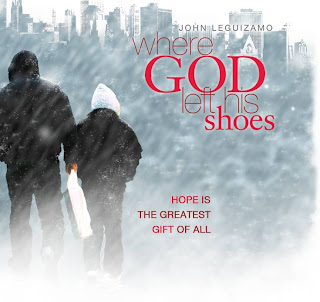 This is one of the small films that Unseen Films was started to highlight. Its a good little film that isn't great, but is definitely worth seeing. It's also one of those small independent films that are going to fall into the darkness if no one shines a light on it. This then is our shining a light on Where God Left His Shoes.

John Leguizamo stars as a father whose family ends up in a homeless shelter at Christmas time. On Christmas Eve he gets word that an apartment they applied for is there's however a catch, he must have a job by five pm that day in order to get it. Leguizamo and his son then head off in an effort to find a job so that they will have a home on Christmas morning.

Darkly hopeful tale about the power of family to make things alright is an okay film.

It's a great looking film that really feels like New York at the holidays, but at the same time it feels very much like a film that is wearing its independent nature on its sleeve like a badge of honor. The result is that the film never fully clicks. To me the film seems like its trying too hard to be about something.

I'd like to give points to Leguizamo for a nicely rounded portrait of a family man trying to do the best he can. It's a warts and all portrayal that helps keep his character some one we want to watch.

Worth a look if the subject matter interests you
Posted by Steve Kopian at December 24, 2011