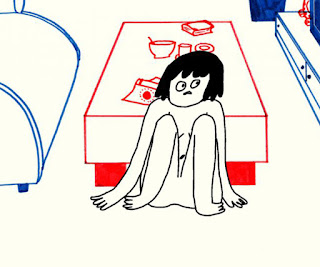 Renata Gąsiorowska's CIPKA (Pussy) is a masterpiece. A beautifully animated short that just works to hell with the fact that I'm a guy this is just a great film.

The plot of the film has a girl alone decide to pleasure herself but things go sideways. I can't really explain more than that because of the nature of what happens will be lessened.

The visuals of the film are stunning. They are simple. see above, but at the same time they manage to covey so much. What I love is how as the film goes on things become more complicated, the visuals more detiled. With the bits toward the end I was smiling with wonderful sense of glee because the film just pulls it all together into a glorious use of color that replaces the white world.

My only question with the whole film is why does it feel it needs a guy with a telescope in a couple of scenes. Yes I know it allows for a funny  gag but it's out of place.

I can't say enough good about it except that it's very possible Renata Gąsiorowska maybe one of new favorite directors. If this one plays near you see it.

(Additionally I would love to hear what any women who see it think of it)
Posted by Steve Kopian at January 29, 2017