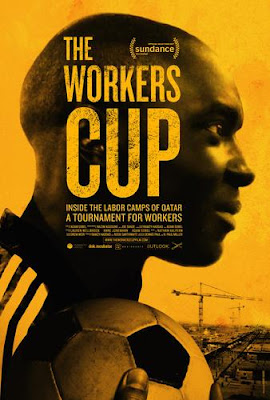 Portrait of life in the Qatar workers camps where men from all over the world live while they build the stadiums for the 2022 World Cup. As they build 24 companies field teams and set up a tournament for the workers.

Odd ball mix of middling sports doc about the teams and the games mixes with a semi social justice story that only touches on the horrible existence of the workers that results in a film that just sort of lays there.

If you aren't aware of the terrible situation of the workers in Qatar this film will give you only a hint of the bullshit that is going on. Effectively the companies are recruiting people from all over the globe- many being asked to pay fees to get the job- only to find slave like conditions when they get there. Work days are every day. Their papers are stolen, they can not leave the camps except to go to work and contact is limited with the outside. Many camps are over crowded. The men are effectively slaves with the inability to do anything even go home controlled by the companies and the Qatar officials. Little of that is really in the film which mentions it but focuses more on the men and the football matches. (if you want to know start with the HBO REAL SPORTS stories)

While the lack of information on what the workers actual conditions might have worked had the film been more adept at showing the football teams, their prep and the matches in anything remotely an exciting way. The sports footage in this film might actually be the least exciting I've ever seen. Its not bad, there simply isn't any emotion in it.

About half way into the film I suddenly started to wonder how Hubert Vigilla would describe the film if we were talking to each other about it. Hubert has this killer way of reducing everything down to laser simplicity. There is a genius to it. I keep hearing him say "There were these workers who were abused and then some football happened." Which kind of sums up my feeling.

I suspect that the reason the film is so odd is that the director had to promise certain limitations in order to get access and then had to cut around it.

Personally I found this film to be disappointing and not really worth the time- which kills me because the guys in the film deserve to be seen and heard.
Posted by Steve Kopian at January 30, 2017