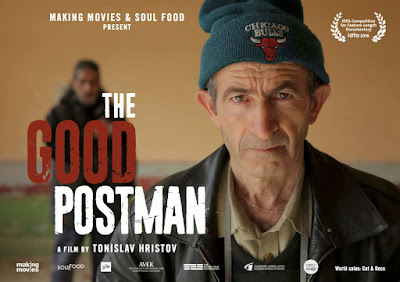 Haunting portrait of a small dying Bulgarian town Golyam Dervent on the border of Turkey the race for mayor is on. In addition to the current mayor there are two other candidates, one is throw back to the communist days and the other, is the village postman Ivan. Ivan has a radical idea to save the town by taking in Syrian refugees in the hope that if they save them they can save the town.

Operating on multiple levels The Good Postman is on its surface a look at the outsider political process in a small town. It’s so small that there are only 38 people in the village and everyone knows everyone. Even so both Ivan and his chief rival are the outsiders behind the towns incumbent mayor. We are given a ringside seat to a film that will examine what it take to both win the election and attempt to bring the town back from the brink of extinction.

On another level the film is working on is as an examination of the refuge problem in Europe. Golyam Dervent was once the literal gateway to Europe and the steady stream of refugees passing through the village are causing ripples. Despite Ivan’s good hearted desire to help people in need and the town itself the rumblings of the anti-immigrant factions of the right are seen to be in action on TV and the edges of the town. It’s this portion of the film that is so haunting since it nicely gives voice to the various sides of the issues. What is most intriguing is that within the village the most vocal voices against taking in any refugees comes from those who are themselves immigrants.

What starts off as a kind of comedy flips somewhere along the way to become a rather sad look at the state of Europe today. Its a film that leaves you pondering many thing- What does taking in refugees actually mean?  As it is being on the border the village has a problem in that the refugees wander through it on their way to somewhere else- but what would happen if they stayed? Can a  town be compassionate?

The Good Postman is something rare in documentary filmmaking, something that plays more like fiction. Watching the film I was struck by the notion that what I was watching was not real but a carefully modulated film from Eastern Europe. The people reminded me of characters in films from in and around Bulgaria. The images are simply stunning and at times seem too carefully composed to have been gotten by chance. This is not a knock against the film rather statement that this portrait of reality somehow transcends of happenstance recorded reality to become a very real and moving work of art.

Thinking about the film some weeks on I find I am still haunted by the film. There is something about it that hangs around your brain. The people crawl inside your heart and take up residence, its ideas rattle around and keep popping up asking to be considered.

Recommended when the film runs again at Sundance (tickets here) or during what I’m certain will be its eventual theatrical run
Posted by Steve Kopian at January 20, 2017