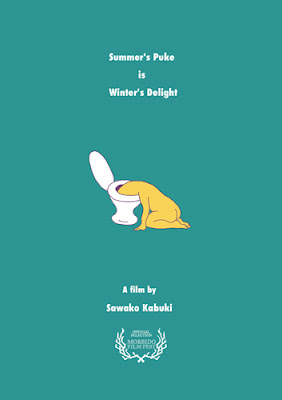 Sawako Kabuki's SUMMER'S PUKE IS WINTER'S DELIGHT is a three minute endurance test. An animated music video of a sort, the film has fractured techno beat over stuttering dialog and the sound of a woman throwing up. I suspect that some are going to feel the need to heave themselves.

The images are drippy melty sort of images where a woman eats to much then throws up and then runs off to have melty sex with a man who force feeds her and it all repeats. The effect is disturbing and disorienting and despite running only three minutes it feels much longer

I honestly have no idea. I suspect the film exists to get Kabuki noticed but beyond that this is the sort of thing one would pass around to friends just to see their reaction as opposed to wanting to sit down for a good time. Misogynistic, the film maybe trying to say something about the things women do for their lovers but it's a film that bludgeons it's characters and the audience to the point of not caring- or at least wanting to hide under the seat in front of them.

Artistically the lines and images are interesting and well rendered but divorced of the disturbing soundtrack there isn't anything we haven't seen before. 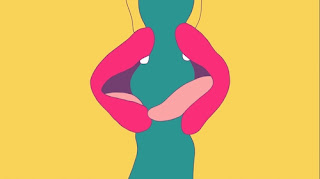