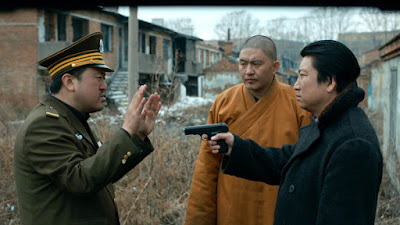 A gangster with soap that knocks people out so he can rob them, a fake monk looking for solidarity through common pursuit, a forest ranger looking for a stolen tree, cops trying to solve a crime without clues and a few other odd ball people wander through Jun Geng's very funny farce FREE AND EASY.

One might be tempted to compare it to some of the off kilter work of Jim Jarmusch or similar directors but at the same time there is something truly unique and quite wonderful, not to mention frequently funny about Geng's film. Sure everything seems to be odd or off  with all of the characters and situations in the film, but at the same time Geng has rooted the film largely in a reality that makes us accept what we are seeing. Sure the soap bit is out there, but all of the rest really isn't that far from reality or people we know- we're just seeing them through a slightly farcical lens.

There is a flavor to FREE AND EASY unique and wonderfully it's own. Its a film that looks like other films set in the wilds of China, much like how can see several versions of the same dish from different restaurants  but there is always something slightly different to the taste the result of the chef's slighting differing ways of mixing the ingredients. Geng has this wonderful way of mixing the humor/fantasy with reality to make something that in its way really hits home.

Early in the film there is a scene where a young man who was robbed via the soap goes to report the incident to the police. The sequence goes sideways as the police begin to quiz him about his martial arts skills and then ask for a demonstration. It's an odd moment  but watching a young man  do a few reluctant kung fu moves  the uncertainty, excuses creates this wonderful connection to reality.. It nails that awkward moment we've all experienced where someone has asked us to be on. Its a throw away moment that moves us closer to believing what we are seeing. There are several moments through out the film which ring with a clarity and understanding of reality that most dramas never get.

This a farce that isn't really a farce even though things play that way. This is a film that is ultimately something much more.

I really love this film a great deal. Its one of those movies where I can't stop thinking about. Its also a film where I have been struggling to do a review where I can fully  express the feeling and the flavor of the wonders that are contained inside. Its a film that sneaks up on you and makes you fall in love with it.

If you want to cut to the chase and get to the pull quote simply know that this is one of the best films I've seen from Sundance this year. Its one of the gems of the early film year and a film I can't wait to for friends to see it so that we can discuss it.