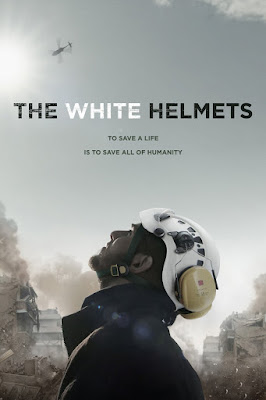 The Oscar nominated White Helmets is a must see. A deeply moving portrait of the civilian group in Syria who rush in to help the victims of the war rescuing those trapped in collapsed building or bombings will reduce you to tears. If one wants proof that there is goodness in the world one need only see this film.

Following members of the team we see what it takes a job that they don’t get paid for and which will probably kill them. Not only are they running toward the danger of war they are now being made targets by the Syrian government who don’t want any survivors in the wastelands they are creating.

This film rocked me to my core. The film deserves an Oscar and the men and women in the white helmets deserve out love and support.

While the film can be seen on Netflix I have to  add that Filmatique (who is not screening the film) will donate 50% of all its proceeds to the Syrian organization White Helmets during the week of January 26th - February 2nd.

You can make a difference. Sign up now at Filmatique or donate directly to White Helmets.
Posted by Steve Kopian at January 28, 2017