The work of William Joyce and Meet the Robinsons (2007) 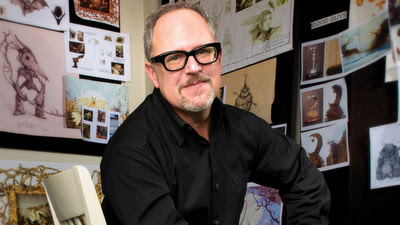 William Joyce is an anomaly. An Oscar winning filmmaker, genius, and all around amazing fellow, Joyce has been writing books and making films and creating art for decades and yet most people really don't know who he is.

If you mention his name to most people they will stare at you blankly. They might ask if he was related to James Joyce, or if you're historically inclined you may say something about Lord Haw Haw. If you have kids of a certain age then they might be aware of his children's books.

The funny thing is most people don't realize that many of his books have been made into films and that most amazingly his visual and story telling style has actually survived the transfer to the big screen more or less intact- a fact that has  caused numerous of my friends to say "Oh shit" in disbelief when they realized all the films he had a hand in. The Oh Shit is usually followed by "why didn't I see that."

The reason that no one really notices it unless they are fans of Joyce's work is that he has worked pretty much for every studio telling his stories in his style. Its kind of like if Hayao Miyazaki or Walt Disney never had their own studio and released their films under other banners. Joyce's body of work rivals that of Ghibli and Disney in quantity and quality, though most people don't realize it. (And don't even question me on this - he is great enough to be compared to both Miyazaki and Disney)

Of course part of the problem is that Joyce has either simply been a writer or a production designer on films, but if you know Joyce's work, you know that just using his words and visuals effectively makes him the de facto director/creator regardless of who is listed as the director. 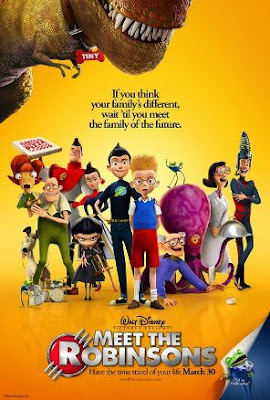 Based on a book by William Joyce (A Day with Wilbur Robinson) MEET THE ROBINSONS is a wonderful transposition of Joyce’s work on the big screen. It’s a film that doesn’t really look like any other Disney film, rather it looks like Joyce’s other big screen films like ROBOTS, EPIC, RISE OF THE GUARDIANS and the Oscar winning short THE FANTASTIC FLYING BOOKS OF MR LESSMORE and the TV shows Rollie Pollie Ollie and George Shrinks. While the film is a great deal of fun it unfortunately suffers from a major problem, it’s a film almost no one ever talks about or even seems to like.

Why the hell is that?

The film is the story of  Lewis a brilliant scientist who is whisked away to the future by Wilbur Robinson to track down an evil genius in a bowler hat.

It’s a charming and moving film  that resonates with all sorts of themes and ideas beyond the grand adventure at it’s center, among them the bittersweetness of the road not taken. Its a film that is playing on a deeper level than your typical Disney gee whiz one. Yes, the film is fun but at the same time the film is operating in the same territory as LILO AND STITCH , or some of the Pixar (UP) or Ghibli films where there is a serious subtext to the fun. Its a subtext that some people don't like.

I also suspect that some people don't like the look of the film. Not looking (or behaving) like a typical Disney film I don't think people think of it as a Disney film. This is the sin of being a studio such as Disney or Pixar or Ghibli - all the films they release begin to look the same after a while. I suspect it's mostly for branding and making it easy for people to know your films.  ROBINSONS looks like a William Joyce film, not a Walt Disney one. (Though interestingly Joyce started work at Pixar and contributed to both TOY STORY and A BUGS LIFE)

The thing is that if I can sit someone down and make them watch the film they usually fall in love with it. This is a film that upsets expectations and when you allow it to wash over you ends up being one of your favorites. Its wild and crazy and contains all sorts of throw aways and references that most people don't get- usually because they aren't paying attention- Disney films (or for most people animated films in general) simply aren't that clever.

To be certain that Joyce didn't actually write the screenplay- eight other people are credited with it- but at the same time if you know Joyce and his work it's clear that he was an influence on the film more than anyone would care to admit (much like Hellboy creator Mike Mignola was the guiding star for ATLANTIS THE LOST EMPIRE. Seriously  look at the character design and compare it to Mignola's stories)