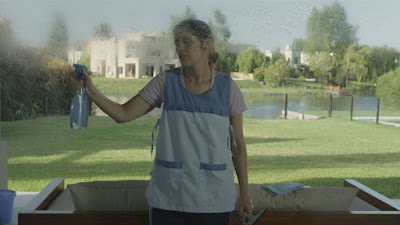 A woman takes a job as a maid in a gated community and drifts through her days until she discovers that just over the hedge is nudist colony where all inhibitions and limitations are stripped away.

Amusing if some what distant comedy of manners is going to delight some and bore others. While most certainly enjoyable the film's distant stance and the insistence on making sure the audience knows it's making a point kind of drains the fun out of the film. As much as I liked the film there was a point at which I kind of stepped away from the film simply because I was tied of trying to embrace the film and being pushed away.

Definitely worth a look when the film closes out the Neighboring Scenes festival Tuesday
Posted by Steve Kopian at January 29, 2017