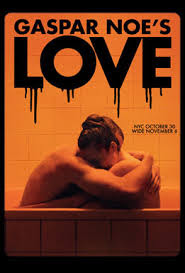 I recently sat down and watched Gaspar Noe's drama LOVE. The film is probably best known for being sexually graphic  and in 3D. Because  Noe was the director the film attracted a bunch of attention when it as released last year as a startling example of a big name director using sex in his film. I'm not sure why since Noe has always been graphic in what he shows.

Sitting down to watch the film one Sunday afternoon I was struck by a couple of things. First the sex scenes are for the most part very beautiful. There is a poetry to them and a frequent lovely marriage of music and image. The other thing I as struck with was that outside of the sex scenes there really is nothing special about the film. Which brings up a serious question- why is that when when filmmakers make films with graphic sex lose they sight of their stories and focus on the sex.

There are exceptions of course - IN THE REALM OF  THE SENSES used it for great effect, but mostly the films become about the sex and not anything else. Of course they don't intend that to be the case, but one they make the decision to be graphic they have to follow through whether they need it or not. The have to go "Full Monty" as it were because they said they would. In REALM the sex is built up to and when we see it it affects us - but in other films it is out there they .....

Noe's LOVE concerns the shifting relationship of a young man with a couple of women. The sex is indicator of the escalating and changing nature of the relationships. The plot is nothing special, it a relationship drama that doesn't have any great revelations, good performances but no real revelations. It does however have lots of sex.

The question is why did Noe feel the need to show the penetration? What does it add? Nothing I can see.  I would have no problem with the full frontal nudity or the sex if it was just there and if we saw it great if not no big deal, but to put it front and center takes away from the film. To put it front and center makes it about the sex and not the characters.

If you need another example look at John Cameron Mitchell's SHORTBUS. The selling point was its graphic pan sexuality. The problem was that the sex was intrusive to the action. The story stopped when we got to the sex. It only worked in the sex club scenes when it was in the background and just happening.

I'm not against graphic sex in films I just wish filmmakers could figure out ho to use it without making it distracting and putting it front and center.
Posted by Steve Kopian at January 01, 2017