Peter Greenaway An Introduction to a series 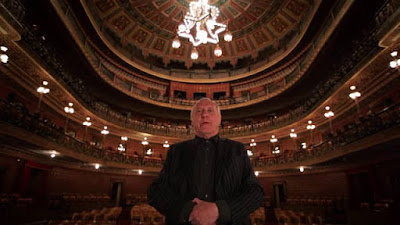 A  tweet exchange between myself and Kenji Fujishima a couple of years ago ended up spiraling outward when the discussion about Peter Greenaway continued off line between myself and some people in my office. During the discussion I suddenly realized that most people really don’t know a whole hell of a lot about Greenaway’s films. Even the people who are hardcore film lovers haven’t seen much simply because the vast majority of his films simply aren’t readily available, and what once were are in many cases no longer available. Sure you can hunt them down but unless you are driven to see most of them you’re not going to have show up any time soon near you.

The high point of Greenaway accessibility was in the period not long after THE COOK, THE THIEF, HIS WIFE, AND HER LOVER was released on home video. The film which captured the attention of film goers sparked the release of his previous films into theaters where I saw a good many of them. The relative ease of seeing the features continued until roughly PROSPERO'S BOOKS at which point his films seemed to become hit or miss.

After PROSPERO I'd stumble into a screening or hear about a new film as it was coming out through odd channels. And until the internet I'd have to scramble around and try to piece together what he did when. Things are easier when it comes to finding information on his film but it's still damn hard to find some of his films legally.

As it stands now I've seen all of his features and I've seen a good number of his shorts and some of his documentaries and TV work. I've seen him at the New York Film Festival when he presented PROSPERO'S BOOKS. I've also seen him speak in connection to his installation of the Last Supper at the Park Avenue Armory (where I got his autograph).

I am a fan and admirer of his work even when I think he's full of shite. I am no expert on his films, on his thoughts or anything else but at the same time I know I can point you in the right direction concerning his works and I know I'm smart enough to get the hell out of the way while you wrestle with the work for yourself.

To that end I'm going to present a three part over  view of some of the work of Peter Greenaway. This is not going to be a be all and end all, rather it's just a pointer in layman's terms concerning what his films are and what you should try. I'm not going to try and explain them as anything other than cinematic experiences because let's face it Greenaway is way more clever then you and me combined and the cinematic treats he makes are like grand puzzle boxes that we have to work at in order to find the candy inside.

Somethings you need to know:

Greenaway was trained as a painter, His films are extensions of his art, They are not meant to be conventional narrative films which are all about the narrative. They are more about the ideas he is throwing at you. He has said he is not making emotional films but intellectual ones. And its true- his films will not make you feel warm and fuzzy but they will get the grey cells firing.

He is much more intelligent and clever than you (or at least he pretends to be) and he assumes you are in his ball park so he's going to throw lots of stuff at you. As far as he is concerned you are just as smart as he is. Don't worry about feeling overwhelmed because there is no way you're going to catch everything he's doing until the 3rd or 5th time through any of his films, if ever. Greenaway plans his film to be dense and he knows you're not going to get it all, but that's okay since you can work it all out later.

Take in his lectures if you can.

There are numerous lectures of his floating around on line and on DVD. He will occasionally show up at an installation or festival and speak at length about the films, art, culture and life. He bounces from one subject to another and references whatever  he needs to make his point. I've seen him twice, once at the New York Film Festival for PROSPERO'S BOOKS and once for his LAST SUPPER installation in NYC's Park Avenue Armory. Both times I was carried along by what he said, and was able to follow what he was talking about. However in both cases, when I got home I found I wanted to know more and spent some time looking up what he had been talking about. Greenaway is aware he is doing this and he wants it to happen because it makes you more than just a receptacle for his ideas. He wants you to engage- and for the last 30 years I've been doing just that.

Over the next three days I'm going to do a quick over view of a number of Greenaway's films. Some I've reviewed some I haven't. The reason I'm doing this is to give you all a starting place to work from concerning one of the great directors in the history of cinema.

First when you see a Greenaway film be open to it. Throw out any preconceived notions. His films are his films and no one else's. Yes he will repeat certain theatrical conceits but mostly he's repeating himself as a short hand. The short hands may not make real sense until you see several of the films.  For example he loves to have a stage for his actions so in PROSPERO, BABY OF MACON, GOLDITZ, EISENSTEIN some of the actions happen on a "stage". He also loves image overlays. Yes it means something but until you see the film the second or third time just go with it and catch what you can.

Lastly don't do a lot of reading on the films. See the films with fresh eyes. Have a basic plot and then let Greenaway go what he does. Once you've gone through the films once then start to compare notes. I say this because you need to find your own way through and short of Greenaway pointing things out, anything that anyone else will project onto the films is going to be their own readings and may not work for you- or even be what Greenaway intended- then again what you get out of it is really what is intended.

And with that come back the next three days as I give you a few pointers toward, but no answers about, the films of Peter Greenaway.
Posted by Steve Kopian at January 03, 2017