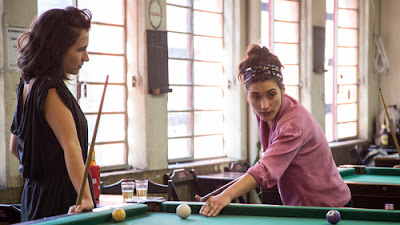 Magical slice of life story about a woman who travels from Portugal to Brazil in order to see if it's the place where she would like to spend the rest of her life. Moving in with an old friend life happens.

Wonderful film has me scratching my head as to why this film hasn't shown up in New York sooner especially since the film was funded in part by the Tribeca Film Festival. This is one of those films that's so good you can't understand why people haven't snapped it up and talking it up.

The enjoyment here is not so much the loose narrative thread but the characters and small moments that nail life as lived instead of life as seen in movies. Three cheers for director Marília Rocha in his first narrative film for taking his documentary training and using it to make a film that feel more real than many documentaries.

This film works more or less from top to bottom with it's non actor cast creating characters that put pretty much every Hollywood performance to shame. To be certain the fact that we don't know anyone on screen helps, but at the same time they do more then act and seem to open themselves up on screen.

This is a stunning film that I hope gets picked up for release in the US otherwise this is going to be a case of yet another film that I'm talking about at years end that no one has ever heard of and has to be tracked down through odd sources.

One of the must sees of not only Neighboring Scenes but also the early film year.

WHERE I GROW OLD plays Sunday at Neighboring Scenes.