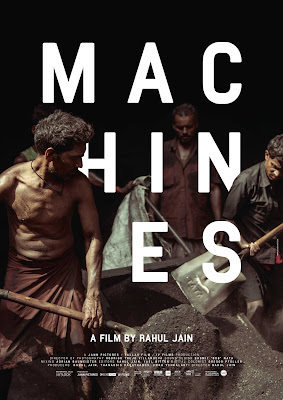 Observational documentaries can either be wonderfully immersive experiences or down right snooze fests. Frequently directors don't know how long to hold their shots or over estimate the interest of their audience and stretch things out past the point of breaking. There is a fine line to be walked and it's the rare director who finds and exploits the sweet spot. Thankfully director Rahul Jain knows where that spot is and his MACHINES is a truly hypnotic experiences.

Beginning with moving camera on the prowl through the various rooms of a textile factory in India MACHINES brings us into the heart of a plant where men and machines and men who become machines work long 12 hour shifts, in all kinds of conditions, in order to turn out beautiful colorful cloth. We watch as dyes are mixed, cloth is created and the men make sure it all runs smoothly. The sounds are that of the machines constantly running and clanking along in a steady rhythm.

I fell into this film and stayed with it to the end. Usually I find the spell breaks somewhere along the way, but this film's brief 1 minute run time is the perfect length. Nothing goes on longer than it should. It also helps that Jain keeps things mtheoving. More often than not the camera seems to be on the prowl moving, shifting, observing, trying to get a better vantage point. Even when the shot is more or less static there is motion as if we were in the room and were shifting out weight from one foot to another.

This is one of the best observational docs that I've run across recently. This is a film that really puts you in the mill with the men Thanks to perfect framing by cinematographer Rodrigo Trejo Villanueva who rightly won an award at the recently ended Sundance Film Festival. Trust me on this his camera work makes this film a must see when the film plays February 16th at MOMA's Doc Fortnight. Between Villanueva's camera work and Jain's picking of subjects this is a team that is going to do great things. Trust me there is a sympatico between them that is magical. They truly put you in the factory if they pumped in smells during the screening you'd swear you were in India.

This film is a must see on the big screen. Its highly recommended.

The film has just finished it's run at SUndance. It will next be seen as the opening night film at the Museum of Modern Art in New York's opening film for their annual Doc Fortnight. (For more information and tickets- on Sale February 2nd- go here.)