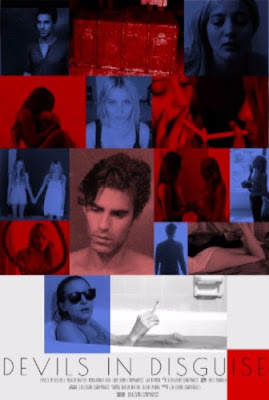 Guillaume Campanacci the director of Devils in Disguise said that he is such a fan of the golden age of French cinema that he wants to bring it back. It’s a nice idea but his plan apparently includes stealing whole cloth from earlier better films.

The plot of the film has two women plotting to kill one of their abusive boyfriend and what happens there after.

We’ve been here before any number of times, both in the stark black and white that much of the films was shot in and in the color that certain key sequences have been lensed. If you are a fan of cinema you’ll catch on with what is going on early and despite the disjointed time frame you’ll know where this is going.

For my taste the film is much too mannered and sparsely if artfully shot. Every image is carefully arranged to the point of distraction We are looking at images that are more arty perfume ads instead of compelling cinema. It’s a film that is aching to be noticed but it doesn’t really have anything original to say. I understand why the film has been bumping around for a couple of years now before hitting You Tube