The t-shirts have begun to be tossed so it must be time for the New York International Children's Film Festival.

Hubert and I waded into the the craziness and have returned deeply moved by all that we've seen. As always it was a blast and we had great fun even as we were moved to tears by the evening's selections 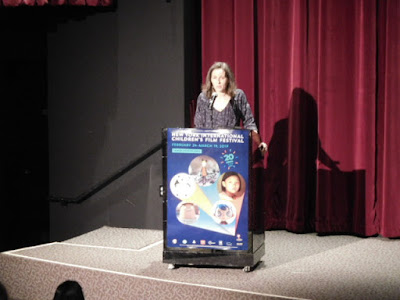 Having been going to the opening night for at least the last ten years I found it interesting that Nina Guralnick spoke about how her favorite memory of the festival is the opening nights. On some level I would have to agree because very often magic happens. Either great films are revealed or something special occurs. This year was no exception- two great films were revealed to the New York audiences. 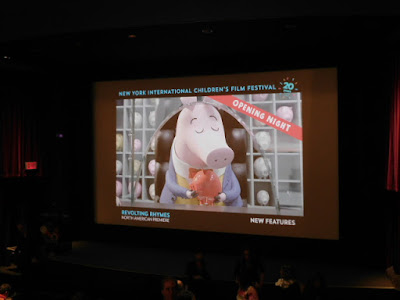 The first film of the evening was the to part REVOLTING RHYMES.  Based on the book by Roald Dahl the film re-imagines the six stories as one tale combining the stories of Red Riding Hood, Snow White, Jack and the Beanstalk and Cinderella into one tale. Broken into two half hour parts I can't imagine the film actually being broken up in two viewings or by commercials. What I mean is that despite being clearly two distinct parts-the point of view readjusts for the second half- the emotional impact is made greater by seeing the story straight on through where you get the emotional resonances to kind of lay you out in the stunning, in the truest sense of the word, conclusion.

The film is essentially two stories told by a wolf. The first is to a woman in a diner waiting to go on a babysitting gig. This is the true story of Red and Snow White. The second is the story of Jack and Cindy- and I'm not going to say to whom or why- only that there is a great deal of tension.

To be honest the film is a wonderful reinvention of the book and a subversion of the original stories into something greater. This is the sort of thing that I suspect many kids and adults will see as their version of the tales.

For me the film was an absolute delight until the ending when the film in four or five shots goes from a really good fairy tale into quite simply a truly great film, There is something about the emotion in the ending as revealed in the vocal performance and the animation that makes this one of the best films so far in 2017. It is...just wow.

After the film Jakob Schuh went to the stage and did a brief Q&A. As you can see below it was a great talk and a perfect excuse to let the kids of NYICFF do more interviewing of filmmakers (They are better than most critics I know)


After the film there was party for members in the basement of the Directors Guild Theater. 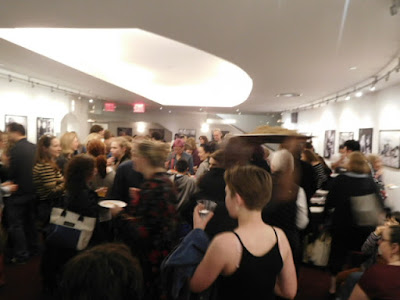 Hubert and I waded into the very large crowd and found a spot toward the back where we watched the people come and go as well as the food and drinks disappear into the hungry members and invited guests. 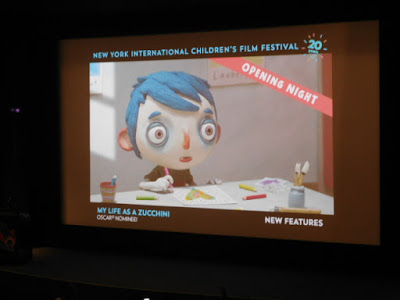 After the party it was back up to the theater for the East Coast Premiere of the English language version MY LIFE AS A ZUCCHINI.

I'm not going to do another full review since we've posted two reviews already (both Joe Bendel and myself have reviewed it) however I do want to make some observations.

The English voice cast is excellent. Other than a one or two moments here the adult voice cast fumbles the dubbing is perfect. Any problems is due more to the syncing of voice to mouth movements.

The audience clearly got the film. There was laughter and applause in all the right spots which was nice. I could tell that many of the adults were clicking with the underlying sadness in the story as one person near me mumbled something about the film being bleak.

Hubert was deeply moved by the film, Both by the sadness and the hope affected him.  Even after the film ended and we were walking to the subway one could hear the emotion in his voice. It was something that I could hear in many other adults in the audience who seemed to have red weepy eyes and a distraction which puzzled their kids who were ready to bound to the next adventure even as mommy and daddy were wiping away tears in stoic silence.

After the film Gkids' Dave Jesteadt who put the English language edition together as well as voice actors Ness Krell (Camille) and  Erick Abbatte (Zucchini) went on stage to do a Q&A.  They also had one of the puppets for Zucchini on stage.

It was a wonderfu evening and a great way to start the festivals 20th year.