COUNTRY: PORTRAITS OF AN AMERICAN SOUND 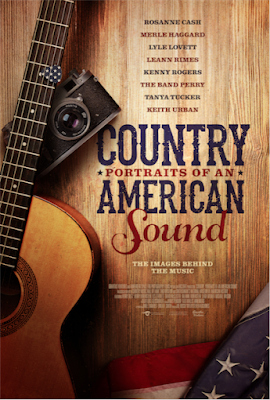 The history of country music as told by some of the genre's biggest names (Garth Brooks, Tanya Tucker, Rosanne Cash, Merle Haggard, Charlie Pride, Brenda Lee, Lyle Lovett, Kenny Rogers...) and the photographs of many of it's photographers (Les Leverett Henry Diltz, Raeanne Rubenstein, David McClister, Michael Wilson...). From the days before it was called country to today the film is an overview of the music millions know and love.

This is a good history of country music that will both entertain and enlighten anyone who wants to have a basic knowledge of the the development of the genre. Filled with lots of remembrances and and even more great photography this is a great way to get to know the through line of the country.

While the film is a good introduction and is entertaining it has a couple of problems that keep from being a great film.

Because the film is nominally, and unevenly, about the role of photography in country music the actual history of the music suddenly stops or goes off on a tangent as we get a discussion of the work of this photographer or that one. Then just as you begin to think it's about to stay on point the film suddenly veers off again to continue on the history of the music.

The other problem is that while the film is full of music there was a point about a half an hour in when I suddenly realized that even though we are seeing all of these stars we are not actually hearing much their music. Yes there are snippets but more often than not the key music (some of the early recorded songs) or key events (Ray Charles's country album) are not represented on the soundtrack. Certainly we don't hear songs by many of those interviewed. While I completely understand the problem is music rights, it makes for an odd doc when you can't hear the sounds that are being talked about. In a weird way discussion of the say the Bakersfield Sound only makes sense if you know the artists they are talking about.

You have to forgive me I really like this film but it's kind of an odd duck- a film that is trying to be about two things country music and photography that doesn't wholly strike the right balance and which doesn't always give us the audio to fully understand the arc of the music. If you can go with the film for what it is I highly recommend it,

Ultimately though the film  points up the fact that some one needs to do a longer deeper history of country music that can get it all together... perhaps even director Steven Kochones who clearly knows what he' doing-he just needed a bigger canvas to do it on.