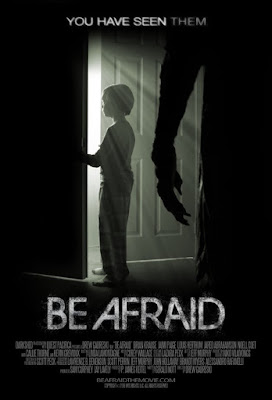 A solid entry into the modern resurgence of horror, BE AFRAID manages to squeeze some genuine chills out of the audience to be a delightful monster on the loose film.

Beginning with a chilling teaser as Dean Booth tries to protect his family from a unknown danger  he thinks is outside his house BE AFRAID grabs you by the throat. What is out there and why is it after his daughter? The answer isn't coming just yet...The film then jumps ahead a bit as Dr John Chambers moves into the town with his family. As he tries to acclimate himself to a new home and a new job, strange things begin to happen. His son has nightmares and he is afflicted with sleep paralysis during which he sees dark figures. What is going on and what is the dark secret of the town?

While the basic plot is one that most horror fans have seen before the film manages to keep things fresh via a few new twists and a cast that sells what they are doing. With so many low budget horror films being churned out it is the rare horror film these days that generates genuine fear, more so when you think you know where you're going. All hail director Drew Gabreski and writer Gerald Knott for creating a film that feels well worn and then uses that against us to create genuine scares.  Their ability to generate fright is not to be under estimated.

Forgive me for not saying a great deal about the film. This is a genuine gem of a film. A wonderful old school B horror film that if it was made in the 70's or 80's would now be considered a cult classic. I also don't want to over sell it. This is not a big splashy horror film with blood and gore and jump scares but one of slowly building tension.

A must see when it plays at the Winter Film Awards Thursday(tickets here) or when it hit theaters in April.
Posted by Steve Kopian at February 26, 2017