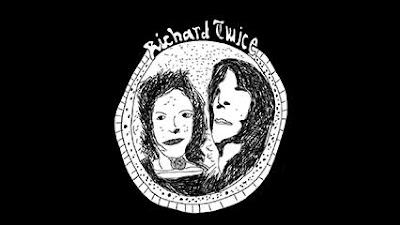 Matthew Salton's RICHARD TWICE is a wonderful music documentary on Richard Atkins. Atkins was part of the Psychedelic folk duo Richard Twice which disappeared off the face of the earth after recording their debut album.

Told in Atkin's own words RICHARD TWICE is one hell of a story. Beginning before he got on the road to fame when an accident has him meet the mysterious Mr Higgins, an older gentleman who gives him a crucial piece of advice.The film then shifts gears as Atkins ends up heading toward a what should have been a big career....

I love this film.  A perfect marriage of animation and live action storytelling this ten minute film is as good as documentaries can get. Salton gets the balance of everything exactly right even the ending which doesn't have all the answers to all of the questions the film raises but which ends note perfectly none the less.

We have been blessed with some truly music docs in the last couple of years- and even this early in 2017 I've seen a couple of music related films that have knocked my socks off. In all honesty RICHARD TWICE is one of the best I've run across of any length. It's one of those films that grabs you and worms it's way into your heart. I'm guessing that the film is going to end up on one of my year end lists come December.

Go see this film. Go track it down. An absolute must see.

Easily one of the best films at Slamdance 2017.

(And yes the film had me searching for the album so before you check Amazon the Richard Twice CD is cost prohibitive- however there is reasonable download)
Posted by Steve Kopian at February 01, 2017