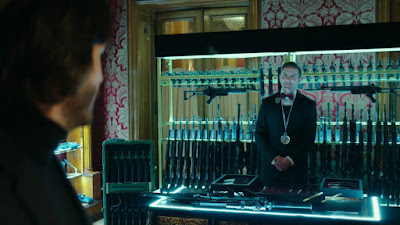 Beginning with a chase that happens not long after the first film ends John Wick Chapter 2 is a non-stop action film that doesn’t end so much as pauses long enough for the series third chapter to be filmed.

The plot of the film has Wick resetting his life after the events of the first film. Just as he literally finishes burying his past an old ally appears calling in the marker that helped him achieve his impossible task. Since Wick stepped back on the path Santino D'Antonio said he felt he could ask Wick for the return of the favor. When Wick refuses Santino blows up his house. Wick then reluctantly completes the task- killing Santino‘s sister- only to find Santino has put a 7 million dollar bounty on his head- because Wick killed his sister and protocol demands that he get revenge. This sets up a gauntlet as Wick must fight to stay alive and to get revenge.

The Boogey Man is alive and killing. A wild and wonton shoot ‘em up this is high octane filmmaking of the highest order. It’s more of the same and then some. It wonderfully expands the Wick universe with many new details and characters while remaining true to the old formula. It’s a blast and a half. If the film is a degree lesser than the first film, it’s only because the sense of wonder the first film created is missing- we know what we are getting. I had a blast. And while I am not happy that the film sets up a third film, the place the film leaves off is the perfect place to hit pause until next we wade into to the insanity once more.

I do have to say that I was in hysterics regarding the film’s sense of New York City- because the film doesn’t have one. Wick enters the The Continental in lower Manhattan and comes out on a roof garden almost 100 blocks north across from Saint Patrick’s Cathedral. Wick and Common enter a subway station near Lincoln Center to appear at the Occulus at the World Trade Center. They are on a platform for the Path Train to New Jersey when a C subway train is announced. They then fight on the train as announcements for the E train are made listing stops that are on the 1 or R and W lines.

Silliness of geography aside John Wick Chapter 2 is a must see and highly recommended- just make sure you’ve seen the first film
Posted by Steve Kopian at February 19, 2017