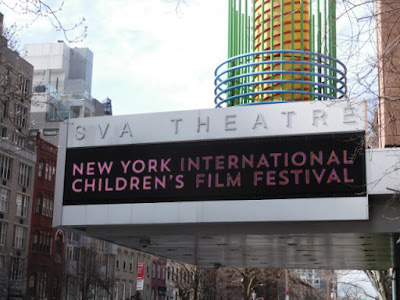 Day two of the New York International Children's Film Festival was a double feature split with lunch with JB and Hubert who were both attending the first film with me. It was also a day in the low 60's which is odd for a February afternoon.

The theater was all decked out for the 20th anniversary and there was a truly festive mood to everything all day. 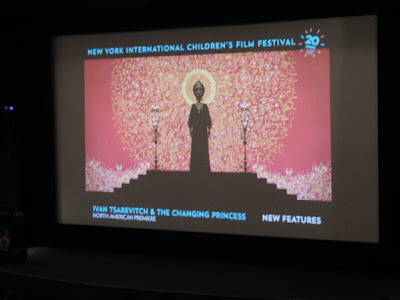 IVAN TSAREVITCH AND THE CHANGING PRINCESS: FOUR ENCHANTING TALES
The first film was from Michel Ocelot. Its four fairy tales that are linked together by actors and director putting them together and performing them.

One story concerned a girl who lived in a cave who was able to tame the monsters that kept her and her people trapped inside. The film is allegory about not letting superstitions and wrong thoughts get in the way of finding happiness.

The second story concerned a a young man who was taught by a sorcerer all his tricks, but there was a catch to the knowledge.

The third story had a young pirate who liked his cat more than anyone and what happens to him.

The final story was the titled story and it's based on a Russian folk tale that Ocelot modified so that the Prince is attempting to cure his father of a fatal disease and involves a princess who changes when a man touches her.

All the stories are told in Ocelot silhouette style of animation. The tales were originally created for Ocelot's earlier TALES OF THE NIGHT but ween't used.

To be honest the tales themselves are very good. The trouble is that Ocelot has linked them artificially and by the time the last one ends you don't know why the stories are linked as they are. Call it a lesser Ocelot film, not because the pieces are bad rather because the whole is lacking.

After the film Ocelot spoke to the audience via Skype and he was absolutely charming. He answered all the kids questions and was only cut off when tie ran out.

You can see the Q&A below


Heading out to lunch with JB and Hubert I stopped to talk to several VIPs from the festival. We discussed what I had seen, what they had seen as well as other things. The one thing everyone told me was that the real hidden gem of the film was RUDOLF THE BLACK CAT. Apparently it's not what you expect from the stills of the film and is actually something wondrous. I'm seeing the film on the 19th so a report is coming. 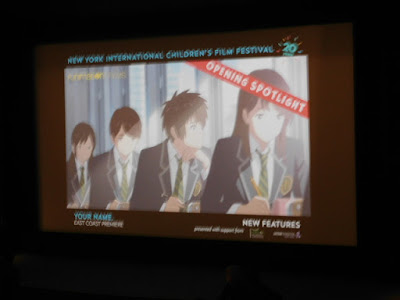 YOUR NAME (Warning there are spoilers below)
Makoto Shinkai's YOUR NAME is one of the hottest animated films in the world. The film has set all sorts of new box office records, it's won all sorts of awards and caused shrieks of disbelief when it failed to secure an Oscar nomination.

The film is hotly anticipated and the line to get into SVA was the longest I've ever stood in for an event at the theater in the last 7 years. Almost everyone on line was well past being a child. This didn't stop everyone from leaping during the T-Shirt toss largely because they were throwing a lot of YOUR NAME shirts into the crowd.

The film concerns a teenaged boy and girl who each night swap bodies causing havok in each other's lives. The are are complications of course involving among other things a comet that is passing by earth.

I know that the film has made a mint and I also know that many people have been laid low by it's revelations but while I did get misty at two points, I was largely befuddled by the film. I truly don't know why people are reacting as they are, it's good but it's not amazing.

For me the film has two big problems:

The first is that the film looks and sounds like a good number of other Japanese animated films, especially Shinkai's own films 5 CENTIMETERS A SECOND, VOICES OF A DISTANT STAR, and THE PLACE PROMISED IN OUR EARLY DAYS in particular. Numerous shots and sequences seem lifted from the earlier films. The opening credits look like several dozen other films (ESCAFLOWNE anyone). The music while good seems to have been picked to sound like the music from several classic anime series.

I could probably have let it slide but Shinkai is on record as saying that the film was carefully constructed for effect with everything constructed in an almost mathematical precision to play on the audiences emotions. He made the film to be a blockbuster and not to tell a story close to his heart. I'm guessing that's why he lifted so much from so many sources including the Korean romance IL MARE.

The other problem with the film is the internal logic doesn't work. Much of the film hinges on the notions of remembering and forgetting, This allows us not to know things because one of the characters doesn't remember- or for the director to milk a moment by having someone forget a name or a person for no really good reason other than the film can make us feel terrible that the young lovers don't remember each other.

On some level that's all well and good except that the film stretches the memory loss to all the characters. For example a huge plot point hinges on trying to find the name of a certain town where one of the characters lives. That's all well and good except that all of the major characters seem to have forgotten that the town was obliterated three years earlier when a piece of a comet smashed into it. I can't really believe that no one wouldn't remember what the town was called after 3 years when some one said the name. I could understand if they couldn't recall the name themselves but when someone said I'm sure they would know it. (I have friends who can't come up with the name of  the town that got hit by the tsunami with the nuclear reactor but if yu say Fukushima, but if you say it they know it)The film almost completely lost me at that moment and I never forgave it. Indeed it was at that point where I started to pick all of the troubles with the film apart.

Normally I can go with the bumps in Makoto Shinkai's scripts (5 CENTIMETERS doesn't completely make sense) and still love the film, but here in YOUR NAME and JOURNEY TO AGARTHA what he is asking is simply too much. The film simply doesn't work on it's own terms there is too much that doesn't connect up if you think about it.

That doesn't mean I hate the film, I don't. Its a good little film on it's own terms and I did get a bit misty at two points, but to be honest the film, especially the second time, didn't earn it it simply had hit the requisite ticky boxes.

By all means see the film when it opens in the US in April- I would just suggest you don't look for the next greatest thing under the sun.
Posted by Steve Kopian at February 26, 2017