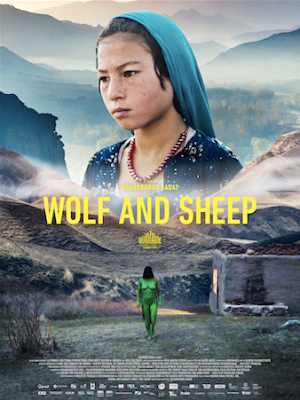 Writer Director Shahrbanoo Sadat spent part of her childhood living in the countryside of Afghanistan. She has teken her love and respect for the land and the people and turned it into the magical WOLF AND SHEEP.

A fictional account that is very rooted in the documentary the film is more a slice of life as opposed to a full on narrative. I know we are supposed to see some sort of narrative in the life of the characters, and the children in particular, but the thread is very fine and it's better not to get tangled up in any notion of plot and just take it as a magically realistic documentary.

Bookended by somber events, the death of a villager by cancer and the coming of unknown gunman the film presents a rather hopeful portrait of life being lived in between. Yes there are hardships and the like but the people go on. They are good people, like anywhere in the world. Its easy to understand why Sadat felt compelled to make a film about them, they are people you would want to meet in real life.

And because of the present situation here in the US it's hard not to reach the ending and ponder Trump Administration's attempt to ban refugees from the US. After seeing the film one would be hard pressed not to offer the fleeing villagers a place to live.

This is one of the best films at MOMA's Doc Fortnight and very recommended.

For tickets and more information go here.
Posted by Steve Kopian at February 23, 2017