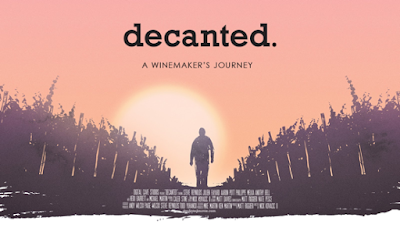 DECANTED is a lovely little film. The cinematic equivalent to sitting in someone’s back yard and shooting the breeze while enjoying a bottle of wine. The film is a lovely look at the making of wine in and around the Napa Valley in California. It’s a nice non taxing way to spend 80 minutes for anyone who loves wine and everything connected to it.

And as enjoyable as the film, unless you love wine this film is going to wash over you and be gone as soon as the credits roll. It’s not that there is anything wrong with it, it’s just that there is no tension, no conflict, it’s simply people making wine for an hour and a half. It’s so beautiful and so nice that it comes perilously close to being an extended infomercial for the wines shown in the film.

I enjoyed my time watching the film, but to be honest about 20 minutes in I was kind of done. There was nothing bad with anything that was on screen but as someone who is not a wine drinker, nor who doesn’t really care about wine making I didn’t have anything to latch on to. This is a year in the life of a winery, which is fine but it didn’t connect to me. I am not like the guy in the film who fell in love with wine making at age 9.

If you are a wine drinker with a desire to see how it’s made in a beautiful to look at film I highly recommended DECANTED. For everyone else this film is worth a shot but not required.