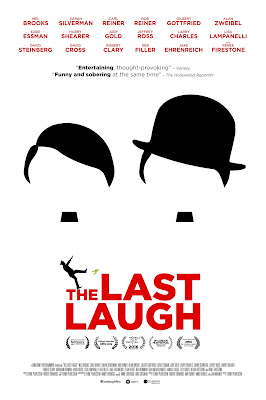 I saw THE LAST LAUGH last year at Tribeca last year and I filed this review:

This film is a look at whether taboo subjects, primarily the Holocaust can be made fun of. Using a who's who of interviewees (Mel Brooks, Sarah Silverman Gilbert Gottfried, Robert Clary to name a very few) and tons of clips the film tries to unravel the Gordian knot of taboo humor.

While the film stays rather close to the notion of the Holocaust and humor, the film gets into a bit of trouble when it tries to broaden the discussion since the excursions off the central topic don't quite lead anywhere and point out that film should have not gone too far afield. I say this because a more general subject about humor and censorship called CAN WE TAKE A JOKE which played at DOC NYC last year covered similar territory and rocked the pillars of heaven. This isn't to say that THE LAST LAUGH is bad. That's not remotely the case, more its to point out that the film isn't as good as it should have been.