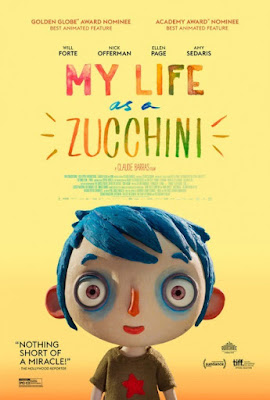 Short (it runs just over an hour) animated film was the Swiss entry in the Foreign Language Oscar race. It is also one of the best reviewed animated films of 2016, and one of those films that is GKids is bringing to US audiences because its a great film that would confound any other studio and they are the only ones who will have any clue how to market it.

Based on a well loved novel by Gilles Paris, ZUCCHINI, or COURGETTE in the original, is a very bittersweet look at childhood, ts a film that is going to play differently depending upon where you are age wise since the older you are the more you are going to connect with many of the notions because you'll have actually lived though more of what happens. While the film has a certain amount of darkness, the film is ultimately a hopeful look at how one gets a family. I'm told the film is toned down from the source novel which could be rather bleak, just like childhood.

The plot of the film has a boy who is called Zucchini by his mother moving to an orphanage. It seems that Zucchini has accidentally killed his mother and his father is nowhere around. As he adjusts to life and makes friends he ends up smitten with a Camille, a rebellious young woman who is dumped there by her aunt.

Told in a series of expanding vignettes that show the passage of time ZUCCHINI is a magical film that really will remind adults what its like to be a child. Granted we were not all orphans but but we all had to interact with other kids and adults and this film manages to reveal that perfectly. We have been here before or at least been there in some form or another. It is beautifully modulated so that there is laughter with the tears.

Everything about the film is near perfect from the voice cast to the visuals it all comes together to make a film that is going to sing in the hearts of many people who see it. Watching it I couldn't help but think how many people I knew who were going to absolutely fall in love with the film. This is a film that is going to go into that warm place that that many people keep reserved for their most cherished films such as the work of Studio Ghibli, not because it shows us an idealized version of childhood, rather because it shows us childhood as lived that makes it okay to remember it all.

I love the film a great deal.

If I had to be pick on the film for anything it is it's incredibly brief running time. Shorn of it's end credits and it's brief mid credit "actor interview" the film only runs about 61 minutes. The film feels much too short. The film has barely grabbed you by the heart strings when it's ending. Its a rare film that you can argue should be longer.

The film hits theaters beginning Friday. That is also the night it is opening the New York International Children's FIlm Festival
Posted by Steve Kopian at February 20, 2017