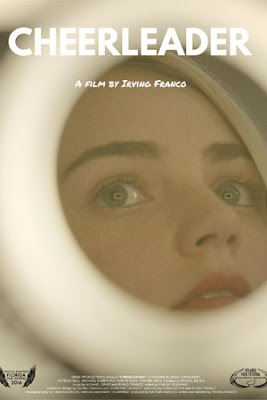 Irving Franco's CHEERLEADER is a one of a kind film. echoing the teen comedies/dramas of the 1980's and 90's the film is an unstuck in time character study of a cheerleader who sets out to make a guy jealous by dating a nerdy guy with unexpected results.

A knowing comedy/drama the film is not going to be what you expect. This is a film calculated to make you feel and experience what should be a well worn story in a new way.  Old school technology mixes with modern day to create a film set every time, Cliche mixes with a knowing structure that forces us to ponder what we are seeing. Viewing the film is a unique experience as our buttons are pushed as we are made to feel and think about what we are seeing.

To be honest I have no idea what I think of the film. I have no idea what I've seen- but I do know that it is a truly one of a kind must see.  It is a film that will leave you knowing that, unlike the vast majority of American films, you have seen something that is going to stick with you on more than an oh that's cool level.

For ticket and more information go here.
Posted by Steve Kopian at February 24, 2017