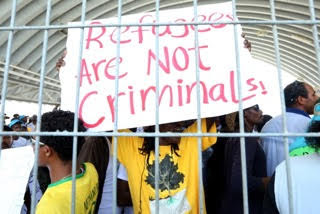 LEVINSKY PARK is a great film. An even handed look at a country dealing with a refugee problem, the film should find a place in the current American debate about helping those fleeing repression.

I love how good this film is at showing a meeting of cultures, in this case that of Israelis and the African refugees who are fleeing the dangers of their home countries. It is a film that introduces us to numerous people who are all sides of the issues and makes us understand their points of view. It beautifully makes the refugee issues very human. It’s a great film that moves your head and your heart. This is one of the best recent wave of films on refugees that I’ve seen because it keeps everything even keeled and doesn’t let the emotional overwhelm the intellectual (or vice versa).

The trouble is that here in America it is impossible not to really take the film to heart. Here is a film that illustrates all the issues that Donald Trump’s refugee mandates have kicked up. We see the lives of everyone on all sides, the twisting of language for a political advantage (in Israel the refugees are infiltrators, in the US terrorists), the economic questions raised by the new comers, and we are left to ponder what is the right thing to do. It’s hard to be an informed American and not see the parallels to our own country- if not now down the road. (I should point out director Beth Toni Kruvant helped out at Newark Airport after Trump's ban went into effect)

This is a must see film. If you truly care about humanity and not political ideals this is an important film. It is a film that will help to clarify what is the right course and why the refugee “problem” is about real people and not labels

LEVINSKY PARK will make its world premiere on Thursday, March 2nd at 7pm at Cinequest. For tickets and more information go here.
Posted by Steve Kopian at February 25, 2017