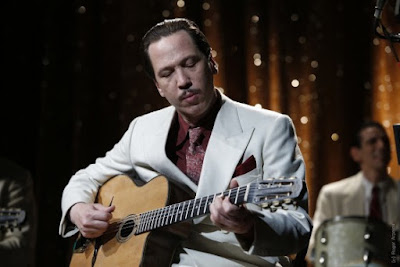 DJANGO is the story of the great guitarist Django Reinhardt during 1943 when he realized that his talent and friends in high places would only keep him safe for so long. Knowing that he had to get out of France he made an attempt to get out into Switzerland.

The film is kind of an old school look at life under the occupation but with awesome music.

After a brilliant and fast moving first third the film slows down a Django and his family flee toward Switzerland. There not far from the border they wait to be escorted to safety. I suspect it’s this portion of the film that is going to make or break the film for many people. While things are not bad the film is essentially Django waiting. Little narrative motion happens but we get a sense of the man and his extended family. The film picks up as Django is forced to play a concert for the Nazis.

And of course there is the music. What can I say but wow. Its all killer stuff and even when the film slows to a craw there is always the music to move us.

Reda Kateb is stunning as the man himself. Based on the films I've seen of Reinhardt he captures the man himself. He has the swagger right and the hand movements seem on target. That the film works as well as it does is due entirely to Kateb who make the roguish musician some one we'd like to hang out with

I should point out there are several stunning sequences, all music related that will delight. The opening concert and the third act one that ends unfortunately are both full of fantastic music. Additionally the sequence where Django’s band arrives in a church where he is playing the organ is absolutely magical. Its only a couple of minutes long but it took my breath away.

I really liked this film a great deal and it had me searching the web for videos and CDs of the Reinhardt's music.

A must see and a great way to open this years Rendez-Vous With French Cinema on Wednesday the 1st.
Posted by Steve Kopian at February 27, 2017